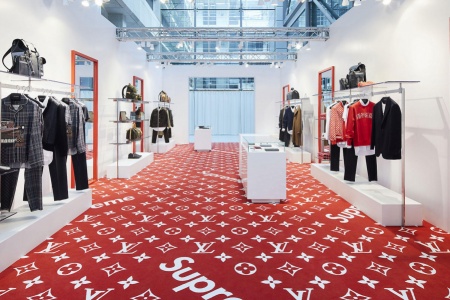 Just two weeks after their opening, the temporary boutiques featuring
the fruits of the Louis Vuitton and Supreme collab have closed their
doors in France and in the United States, well before the scheduled
date. No reason was given by the French house and the pieces are no
longer available.The Paris address located at 10 rue Boucher in
the 1st arrondissement is now totally empty and it is hard to imagine
the frenzy that reigned there only a few days ago. Sales associates from
nearby stores saw the commotion first hand.

At Pull&Bear,
located just across the street, a saleswoman explained: “It was crazy.
People were lining up for hours and then some of them stood outside our
store windows to resell the products they had just bought. We could see
money changing hands. This event gave the brand a very bad image.”

Another
sales associate at Bershka had a similar description. Asked about why
he thinks the store might have closed, he said: “I think they sold
everything, a lot of people were queuing at 5 a.m. to be among the first
for the opening at 9 a.m.” Rather than the planned 30 days, the Paris
pop-up seems to have been opened a total of three days, according to
store personnel in the vicinity. A customer service representative from
one of the Paris Louis Vuitton stores also confirmed that the pop-up had
been opened three days, saying that there is no longer any means of
obtaining any of the pieces from the collaboration.

However, GQ reports
that some VIP customers have managed to get some Louis Vuitton X Supreme
products.The Financial Times says that items were offered on
third-party sites at amounts ranging from 1.5 to 5 times the official
price. One of the iconic silkscreen t-shirts of the collaboration was
selling for $1,600, three times the price charged by Vuitton.No
official reason for the pop-ups closure has yet been announced. Was the
brand owned by LVMH simply overwhelmed by the event (as feared by the
Manhattan community commission, which rejected Louis Vuitton’s request
to install a pop-up in New York) to the point that it decided to shut
down all sales? Perhaps Louis Vuitton was not happy about the explosion
of a black market in plain sight, or did it in fact really sell all the
pieces?Contacted by Hypebeast, a Louis Vuitton customer service
rep said that, “unfortunately, the collection will no longer be sold,
neither in the shops nor online.” The luxury label has not yet responded
to queries from Fashion Network.