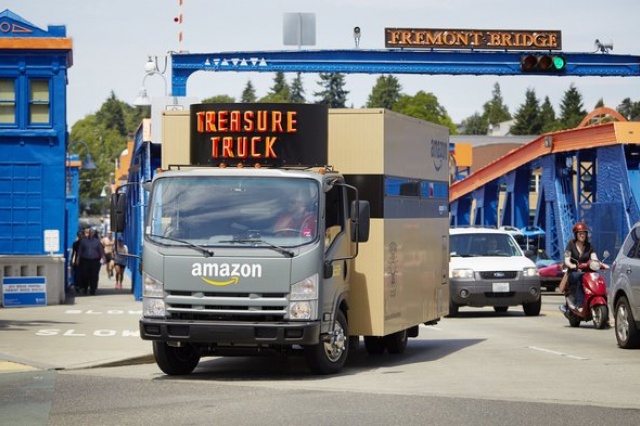 Another Seattle-brewed Amazon.com experiment is going national: the Treasure Truck.

It’s a truck that rolls through city neighborhoods carrying large quantities of only one item, usually heavily discounted (at one point it was GoPro cameras, 64 percent off.).

The e-commerce giant texts those who have signed up for notifications, telling them what product is on offer that day. They can buy it using the mobile Amazon app, and pick it up at the truck. It’s yet another case of Amazon doing what it does: coming up with new ways of selling things, even if they sound a little zany.

Has it worked? Amazon says the truck, which debuted as a pilot in 2015 but officially launched last year, has been a hit in Seattle — its sole location until now — motivating impromptu purchases of everything from Harry Potter books to video games and steaks.

The company didn’t disclose more than that. But the fact that it’s taking it to other cities may be a sign that the initiative is creating some value, in buzz or otherwise.

Now, we don’t know exactly what cities the Treasure Truck will visit. In typical Amazon fashion, the company said on its website it “won’t spill the beans about where and when — but stay tuned.”

Is AI the Future of E-commerce Fraud Prevention?

Louis Vuitton X Supreme: the mysterious end to the pop-ups