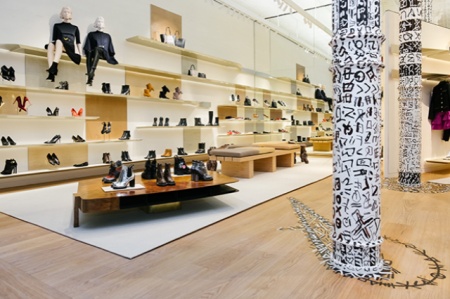 The original SoHo store, which opened in 1998 and also was designed by Marino, has the distinction of being the first of the company’s stores to display its ready-to-wear that was launched that year and has hosted several important global events. In 2011, Vuitton took over the adjoining building that housed a Mont Blanc unit and combined both sites into a store that spans just more than 10,000 square feet. The SoHo store remained open throughout the renovation, closing off one half at a time. The entire project took a year and was completed Thursday.

“The great thing is when these big corporations say, ‘Do downtown, but do it different from the uptown store.’ That’s always the best commission on earth,” Marino said. He said his mandate was to “Make it different from 57th Street.”

Michael Burke, chairman and chief executive officer of Louis Vuitton, addressed the importance of art and design to the brand experience.

“Our clients come to us not just to find a bag, or an accessory, or a luggage — they come to us for a vision, for a dream,” he said. “Luxury is about emotions, so you need to create exclusive, unexpected experiences and tell the story. This is what will happen with the reopening of the SoHo store. It is a voyage of initiation in a confidential place where architecture is strongly linked with art and design and will lead them to the rich universe of Louis Vuitton.”

Marino redesigned the store to reflect Vuitton’s roots as a travel company while giving it an art gallery feel. The renovated store combines modern, minimal and streamlined design, using twisted carbon fiber shelving with a natural rugged feeling with petrified wood and leather. The architecture is designed to support the artwork that is prominently displayed throughout the store.

“Look at those crazy shelves made out of a carbon fiber that’s twisted, totally modern material. It’s all about travel, train speed, horizontal,” Marino said. “You know when you look at things and they look horizontally blurring, because the trains are moving so fast? We made them out of super-lightweight materials.”

Previously, Louis Vuitton products were displayed in boxes or wood cabinets, he said, adding, “Now it’s all out of this super high-tech carbon fiber. It’s freer, younger and hipper, and more high-tech.”

Some of his ideas for the SoHo store sprang from Vuitton artistic director for women’s collections Nicolas Ghesquière’s shows for the brand, “which are so high-tech and have computers and all this speed and are incredibly beautiful and very high-tech,” Marino said.

“There are no more veneers, everything is solid wood that’s sculpted or hit or beat up. I’m dead-set against smooth veneer stuff. It just looks like 20 years ago. It’s all very textured against this super smoothness of these carbon fiber shelves,” he said.

Marino chose to work with artists Shuji Mukai and Giuseppe Penone. The principles of the art movements with which each is associated — the Gutai movement for Mukai and arte povera for Penone — have roots in the Sixties and heavily influenced the concept and development of the store. Marino commissioned Japanese artist Mukai to paint three columns, part of the floor and ceiling within the women’s universe on the main floor.

“The columns were there, we exposed them,” he said. He learned about the Gutai movement because he saw an exhibition on Kazuo Shiraga. “I went to the Venice Biennale two years ago and discovered a huge room painted by Shuji Mukai and I went crazy. And then I read he was part of the Gutai movement. I asked him, ‘Would you do something for us?’ And he said he’d be delighted.” He hand-painted these columns with his team of three people on site.

The piece by Penone, an Italian artist, hangs over the staircase and is made of molded leather and bronze. “It was a purchase from an art gallery. It just fit that wall so cool. I had seen the Penone show at Versailles two summers ago and went bonkers. He’s so good. There’s something about the natural leather, and Vuitton is a leather goods company,” Marino said. The store features wide plank oak floors.

Also lending to the art gallery feel is the track lighting. “I don’t usually do that in Louis Vuitton. It’s what you and I, if we moved into a loft, would put track lighting so we light everything. We’re not trying to be hyper-sophisticated. We restored the old metal tin ceilings that were there rather than do a new store sheet rock ceiling. It’s very SoHo. We put a lot of money into restoration, and we hung the light track below the old tin ceilings. It’s cool, and it’s something legitimate, it’s real, and we’re not trying to force some uptown design on the beautiful nature of the cast iron building,” he said.

“We’re really doing a lot of historic restoration in these spaces and trying to be legitimate and not so corporate. We wanted to take advantage of the beautiful spaces and then go with a light-handed touch,” Marino said.

The color schemes, he said, are very Vuitton: luggage color of dark brown and parchment and ivory. “Dark brown stands for the masculine side of the business, and the ivory stands for the women. They are one of the few companies that are 50/50. Chanel is all women. Dior has a men’s business, but it’s not one-tenth the size of the women’s,” Marino said.

Marino, who has worked for Vuitton for almost 20 years, is designing over five locations for the brand this year and next. In addition to the new concept store in St. Germain are a pair of stores in Hong Kong (Canton Road and Landmark) that are opening this month, and a new flagship in Paris at Place Vendome that will open at the end of next summer.

The SoHo boutique carries a full offering of Vuitton products including men’s and women’s rtw, leather goods, shoes, accessories, watches, jewelry and fragrance. Vuitton’s Objets Nomades collection of travel-inspired furniture and home accessories will also be on display and available for purchase. Highlights include the Maracatu and Cocoon chair designed by the Campana Brothers and the Concertina chair and table by Raw Edges.

“I wanted to make a space where you want to hang out on Saturday,” Marino said. The men’s department also features an on-site hot stamping machine for luggage and two men’s dressing rooms.

The SoHo store will have several exclusives available only at that location. They include a “Capucine Skyline,” ($6,500) that has been created by Vuitton’s artisans to commemorate the store’s renovation. Silver and pink pearls are cut, painted and varnished by hand and then embroidered onto the leather Capucine. SoHo will also offer the women’s “Star Trail Ankle Boot,” ($1,490) and the men’s white “Runaway” sneaker ($815) as a worldwide exclusive. The store will also sell the new women’s sunglasses called “The Party,” ($685) two months prior to their global launch date. In addition, the boutique will offer a special women’s cruise 2017 dress ($7,850), embroidered with green sequins. From the Men’s Universe, SoHo will be the only store in North America to offer a men’s spring 2017 Giraffe Chambray shirt ($850). The shirt has a knit collar and sleeve bottoms.