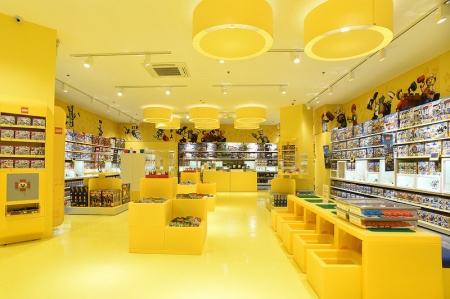 The largest Lego Certified Store in Italy will be in Milan in collaboration with the Percassi Group, following previous openings in Arese, Marcianise, Orio al Serio and Turin.

The 270-square-metre store is located on Corso Manforte 2 at the corner of Piazza San Babila, and will have tables full of Legos in every size, shape and color for visitors to play with. There will also be an “Immersion Portal”, a large transparent box that children can go inside for seeing special Lego creations up close.    In addition, the “Minifigures Scanner” can create an alter ego of the user in a Lego minifigure version. For the occasion, the company is launching a contest called #BeTheLEGOStar, for the most original creation of six Legos made from the 915 million possible combinations.

Then, the company will open the biggest Lego store on the planet in London’s Leicester Square. Spanning 914 sqm over two floors, the superstore is set to open November 17 this year.

It will feature a unique 200,000 brick replica of Big Ben as its centerpiece. Measuring 6.8 m tall and taking 2280 hours to complete, the structure will have a working clock face that lights up at night.

Alongside this centerpiece the store will feature exclusive product sets, hands-on building areas, building demonstrations and a pick and build brick wall.

A mascot named Lester will also be an exclusive addition to the store, and will be available to purchase as a tea-drinking mini figure.