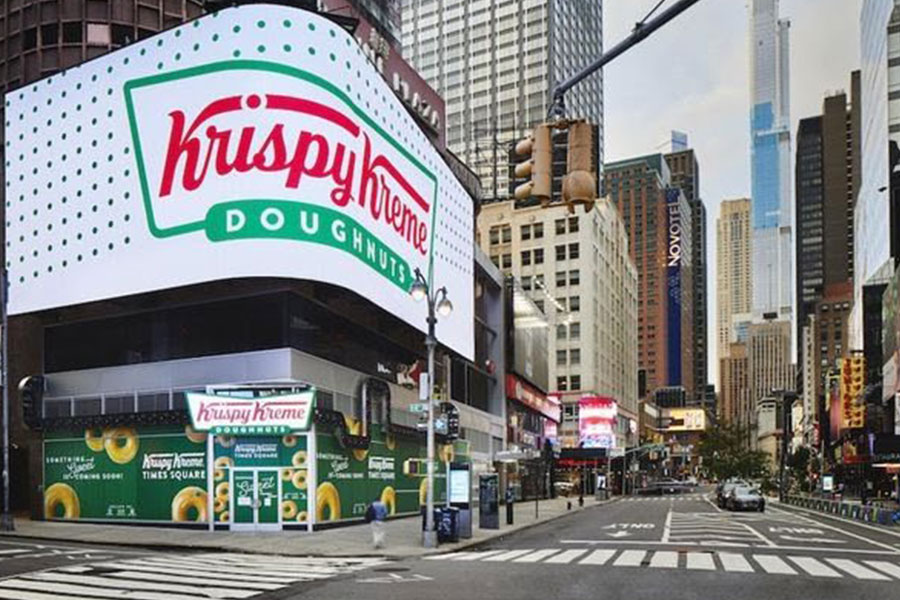 Krispy Kreme, the maker of an iconic glazed donut that’s best enjoyed seconds after it has passed underneath a waterfall of warm glaze, is set to open its Times Square Flagship Shop in New York City on Tuesday, September 15. The opening comes several months after it was originally planned due to the global pandemic, and plans for operation come opening day have been adjusted to keep guests and employees safe.

Plans for the flagship, which has been in the works for about three years, already included an exterior walk-up window and an interior grab-and-go counter which, in addition to convenience, now have the added benefit of offering a more socially distanced option for getting your hands on some hot Krispy Kreme doughnuts. Krispy Kreme’s opening plan includes crowd control initiatives like remote queuing and an online reservation system for guests looking to visit the shop at a specific time, according to a press release.

“Inside the shop, Krispy Kreme will adhere to COVID-19 regulations and guidelines provided by the city and CDC, including employee health screenings at the beginning of shifts, washing hands regularly, wearing face masks, social distancing floor stickers, protective barriers at ordering points, and additional disinfecting throughout the shop,” the release reads.

Important safety notes aside, there’s plenty of things to be excited about in regards to the flagship, whether you’re visiting in person, picking up doughnuts to go, or ordering online for delivery. First off, the Times Square flagship will be home to the world’s largest Hot Light, and it’ll be on 24/7; meaning hot and fresh Original Glazed Doughnuts will be available any time of day (cue Homer Simpson drooling noise). Secondly, the shop is equipped with two production lines and can make 380 dozen donuts an hour (4,560 doughnuts). “That’s a lot of doughnuts,” Michael Tattersfield, CEO of Krispy Kreme Doughnut Corporation, told me.

In addition to core menu offerings and seasonal specials, the Times Square flagship will serve a Big Apple Doughnut, a special edition doughnut offered exclusively at this location. Tattersfield noted that the unique doughnut will come in its own special packaging. Inspired by the candy apples sold at Coney Island, the Big Apple Doughnut has a red delicious flavored Kreme filling. It’s dipped in candied green apple red icing and finished with a royal icing green leaf and a lightly salted pretzel stick for the stem.

The opening of the Times Square Flagship Shop marks a larger expansion of the brand in New York City. Krispy Kreme’s Penn Station location has been remodeled, four new shops have opened, and by the end of 2020 there will be eight shops total in NYC. While the opening of the flagship got shifted from May to September, the company moved up the openings of several new shops. This allowed Krispy Kreme to get a better handle on safety protocol to protect employees and customers as well as gauge what demand would be like. “[The new shops] were very, very well received, which gave us confidence that we’d be ready to open as we were finishing construction in the latter parts of the summer,” Tattersfield  said. “It’s a privilege for us to be able to operate in New York and we look forward to building a long term business in the city.”