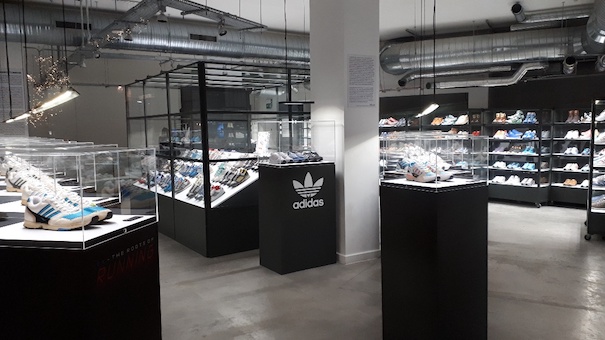 The unit that forms one of the corners of Earlham Street in the Seven Dials area of Covent Garden might seem ill-fated if you consider its recent history. This is a two-floor site that has played host over the last couple of years to (in this order) sports brand Le Coq Sportif, a pop-up for bespoke Magnum ice creams and Sonos, the speaker brand. The latter was intended to be permanent, but closed in September after trading for 9 months.

And yesterday Adidas’ ‘The Roots of Running’ closed its doors after trading for a full 10 days. In fairness, this one was never intended to be anything other than a temporary ‘exhibition’ of running shoes from the 1980s to now and as such it was less shop and rather more marketing tool.

That said, its combination of rows of internally-lit glass-topped cases on plinths with tiered shelves along the perimeter make this a good deal better than many of the displays in the area’s permanent shops. All of which notwithstanding it will be interesting to see whether there is a brand out there that can make a go of this unit as a standard shop that lasts more than a year.