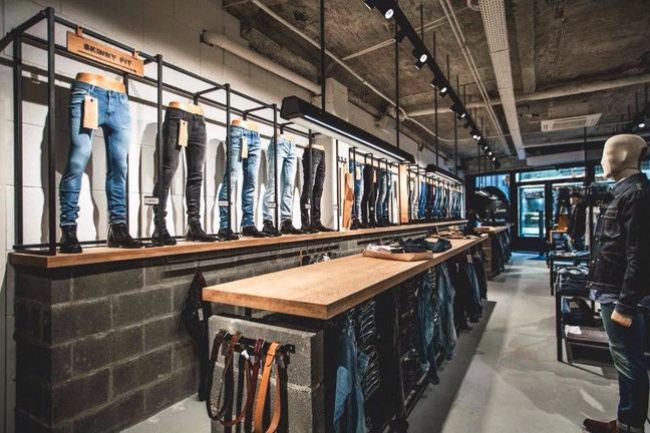 Jack & Jones is going full steam ahead with its new jeans store
concept. The Danish menswear brand owned by the Bestseller group opened
the first branch in Salzburg, Austria, in October 2016, and another in
Tilburg, the Netherlands, in December 2016, and has recently added a
third one in Amsterdam.

The interiors’ décor has a distinctive industrial vibe, and materials such as wood, metal and concrete predominate.

The
store showcases Jack & Jones’ high-end line, Royal Denim Division
(RDD), featuring jeans made with Italian and Japanese fabrics, as well
as a selection of apparel, accessories and footwear from the Premium by
Jack & Jones and Jack & Jones Vintage Clothing lines.

A jeans bar and a jeans wall have pride of place in the Amsterdam store,
presenting the entire range of models and cuts as clearly as possible,
to make it easier for customers to find the right model and the right
fit.

In 2011 Jack & Jones had already introduced dedicated
denim corners in its stores, and the new retail concept is the logical
extension of the brand’s long-term strategy. “Jeans are rooted in Jack
& Jones’ DNA, they are part of our core range. And over the years
our denim expertise has grown immensely, so that unit-wise we currently
are the top-selling brand in Europe for men’s jeans,” said Ciaran Kelly,
the brand’s Sales Director.

To celebrate the launch of this new store concept, the label has created
a jeans model in selvedge denim in a numbered limited edition of 400
pairs, manufactured in Italy and available exclusively at the three
Jeans Intelligence Studio stores.Jack & Jones is planning
further replicas of the new retail concept across Europe, the locations
depending on the opportunities that arise.