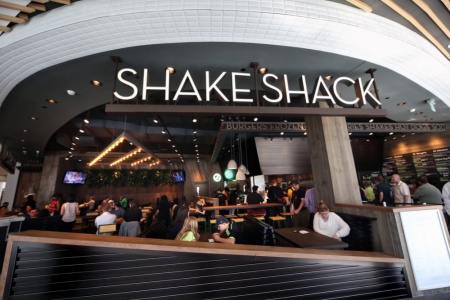 Kuwait City and Dubai already have it. And now, so does Minnesota.

The highly anticipated burger joint Shake Shack opened at the Mall of America with more than 80 people waiting in line. It is the New York-based chain’s 95th location around the world — and its first in the U.S. to be located in a fully enclosed shopping mall.

Shake Shack has been taking its time to expand across the U.S., chiefly with company-owned stores. Overseas, it has lined up franchisees, allowing it to spread quickly across 10 countries.

Shake Shack first entered the Midwest a year and a half ago with a handful of locations in Chicago.

“We’re growing slowly and looking at great places across the U.S.,” said Andrew McCaughan, Shake Shack’s vice president of development, during a soft opening event for friends and family on Wednesday. “We’re not in Dallas or Houston yet. We just opened our first L.A. location. We’re opening about 16 a year [in the U.S.], so we’re growing at a very methodical pace.”

While the chain doesn’t have any immediate plans for more locations in the Twin Cities, he said it is scouting out neighborhoods around town for possible spots down the road.

Shake Shack opened at the Mall of America, Thursday with customers lining up to try it out.

“Nothing to report yet, but we’re definitely keeping our eyes open,” he said. “So future Minnesota locations may be in the cards.”

While this is the chain’s first mall-based location in the U.S., McCaughan added that the company has a broad approach to its real estate strategy. It continues to love stand-alone urban locations, such as its first spot in Manhattan’s Madison Square Park, which opened a little more than a decade ago. Shake Shack also has popped up in airports and stadiums as well as shopping centers.

The new 2,800-square-foot location is on the third floor of the Mall of America’s recent addition on the north side, in the food court dubbed Culinary on North. Melt Shop, Piada Italian Street Food, and Disco Fries are some other recent arrivals to that corner of the mall. A Naf Naf Grill is coming soon.

On the other side of the mall, also on the third floor, is another burger-focused establishment, Burger Burger, which opened late last year. Like Shake Shack, Burger Burger also sources its beef from Minnesota and has a number of beers on tap. It is a venture of Kaskaid Hospitality, which also operates Crave and other restaurants around the Twin Cities.

While some have taken notice of the head-to-head burger battle, both companies brush it off.

“How many places are there to buy jeans at the mall?” Kam Talebi, a Kaskaid executive, said to the Star Tribune earlier this year. “That doesn’t keep Old Navy away. We knew about Shake Shack. They’re in the new development at the mall, it’s completely different from where we’re located, it’s practically a different ZIP code, that’s how far away they are from us.”

“I hope they do well,” he said. “There’s a lot of great burgers out there. … We just opened in L.A., where there’s In-N-Out, one of my favorite burgers as well. We just do our thing.”

The New Kid On The Marketing Block