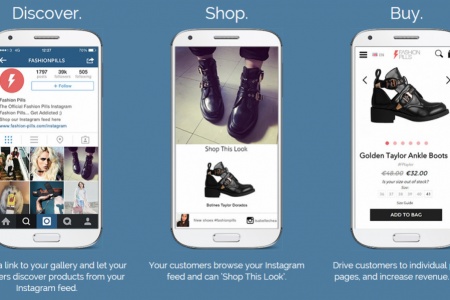 The retailers tag products in their photos, which are hidden behind a “Tap to view products” button. After selecting their product of choice, users see an in-app details page with a specific product’s price, description, additional photos, and a “Shop Now” button to buy it on the web.

Instagram won’t take a cut of purchases, and instead plans to monetize the product by later allowing brands to pay to show their shoppable photos to people who don’t follow them, says Instagram’s VP of monetization James Quarles. Instagram now has 500,000 advertisers and is finally earning some serious cash four years after Facebook acquired it for nearly $1 billion.

Purchasing products entirely inside of Instagram, as Facebook is now trying with chatbots, isn’t something the company is working on yet. That might put it at a slight disadvantage to Pinterest, which is testing Buyable Pins with in-line checkout flow. But both are emerging as powerful discovery mechanisms for users who aren’t sure what they want to buy yet and therefore aren’t just searching for it on Amazon.

Eventually Instagram wants to add a “Save” feature so you can bookmark product posts as you browse and come back to them. Users aren’t always ready to buy on impulse. That’s why unlike Instagram’s existing product ads that immediately link to checkout sites, these shoppable photos give you time to compare different color options and the price so you have true intent if you go to buy.

Thanks to shoppable tags, brands won’t have to resort to clumsy “check link in bio” captions on their photos, since Instagram doesn’t allow links in organic posts, and only lets profiles include a single URL. The full list of test launch partners is Abercombie&Fitch BaubleBar, Coach, Hollister,  JackThreads, J.Crew, Kate Spade, Levi’s Brand, Lulus, Macy’s, Michael Kors, MVMT Watches, Tory Burch, Warby Parker, and Shopbop. [Update 10:30am PT: Those brands might disheartened to see that Instagram went down with a service outage this morning, that could cause some to grumble about its reliability.]

The design of shoppable photos is wisely lightweight. Instead of making product tags immediately visible, they’re only revealed if you tap the little tag button, so they don’t ruin the beauty of images. They don’t feel as intrusive as the buy buttons Facebook and Twitter have tested. The product was built off of the emergent behavior of celebrities tagging the products their seen with, which often come from their sponsors.

And shoppable photos match user behaviors as well. According to a study run by Instagram, 60% of Instagrammers say they learn about products and services on the app, while 75% say they take actions like visiting sites, searching, or telling a friend after being influenced by a post on Instagram.

Now they won’t have to close the app, open the browser, and track down the product they were just looking at. The company did focus groups in LA and Chicago, where Quarles says it found that the main gripe of shoppers on Instagram was “I want to learn more, but it’s very hard to go do a web search from another app. The product details are hard to find.”

Making it easier for users to get shopping value from Instagram could keep it on people’s homescreens. Meanwhile, brands might eventually pay to show their shoppable photos to more users, or buy ads to get more followers who’ll see their products organically in the feed. It’s been obvious for years that Instagram would embrace shopping, but the execution demonstrates its dedication to prioritizing a clean user experience so its community keeps growing.