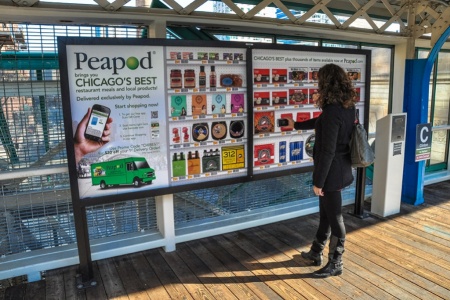 At Peapod, online grocery delivery has always been trendy — even if it took the market years to catch up.

Nearly two decades ago, Peapod emerged as the sole survivor of the online grocery collapse, narrowly escaping the financial carnage that befell other competitors. Now, the dotcom survivor is gearing up for another bruising battle with aggressive, deep-pocketed challengers, including AmazonFresh, Instacart and FreshDirect, who are fighting for online supremacy in a decidedly old-school business.

And of course there’s Walmart: The nation’s largest retailer also sells the most groceries, a category that’s critical to market dominance for its ability to drive traffic and cement loyalty. Groceries account for more than half the company’s sales. Walmart is testing several modes of grocery delivery including click-and-collect models that include a 24-hour automated kiosk, an Uber partnership in Arizona and most recently, a program where employees deliver grocery orders to customers on their way home from work.

Executives at Peapod come equipped with one thing lacking at many of their competitors: nearly 30 years of experience understanding the intricacies of delivering pasta, crackers, soups, cereals, juices and thousands of other food and beverage products. This invaluable insight is by no means a guarantee for success, but it could give Peapod an advantage over fast-growing rivals that the company claims are making many of the same mistakes it and other startups made before the dotcom implosion.

In an industry beset by slow growth and razor-thin margins, grocery companies are hungry to capture any new revenue they can, and the online business represents a potentially lucrative opportunity. An estimated 20% of all grocery spending — a total of around $100 billion — is expected to come from online shoppers by 2025, according to the Food Marketing Institute and Nielsen.

While a quarter of consumers today regularly do their shopping from their computers, that figure is expected to more than double during the next decade. With e-commerce comprising just 2% of grocery sales today, there’s plenty of room for Peapod and its competitors to grow their online businesses.

Peapod was founded in 1989 by a pair of brothers, Thomas and Andrew Parkinson, but the innovative idea was still several years away from moving online. In the beginning, employees delivered the company’s product catalog to customers by hand on a floppy disk — at first targeting about 400 people in the Chicago area.

Customers would submit their orders and employees at Peapod — oftentimes the brothers themselves — would grab items from nearby store shelves before delivering. It wasn’t until 1996 that the company launched its website — making it one of the first internet startups.

While an estimated 0.5% of U.S. shoppers have used Peapod, compared to 2% for AmazonFresh, its sales are significantly higher than the retail juggernaut, signifying that Peapod’s core consumers are shopping more frequently and spending more when they do.

“[Peapod is] Ahold Delhaize’s most under-promoted asset and there are significant upside opportunities if the retailer is able to better promote it and drive increased shopper penetration,” Elley Symmes, an analyst at Kantar Retail Americas Market Insights, told Food Dive.

Peapod learned early on that using the traditional grocery store to complete orders is good when you are just starting out, but it isn’t scalable when the business really begins to grow. Bienkowski contends that grabbing items at supermarkets where aisles and displays are laid out to maximize high-margin purchases is not conducive to shopping for someone else’s groceries. Peapod is now dependent upon its network of 26 distribution centers to quickly and efficiently fulfill orders on the more than 12,000 products it carries.

The online grocer has carefully studied how to deliver those orders once they have been assembled. Peapod has detailed what it calls “last-mile metrics” — a complex set of algorithms that enable it to systematically pack multiple orders on the truck and understand what routes to take in order to maximize revenue and save time. The company is happy to concede the instant delivery game to smaller players, instead focusing its attention on larger, more profitable orders.

Peapod first started out in Chicago, but has since branched out to 24 metropolitan area markets. The online grocer, which is only profitable in mature markets such as Boston, Chicago and Washington, D.C., has taken steps to increase its presence and meet demand in other places like New York City where it is building a 345,000-square foot distribution center designed to handle the city’s dense population.

To be sure, Peapod has one advantage few of its competitors do, with the exception of Amazon and Walmart: a much larger parent company committed to boosting its online presence and a willingness to help fund growth in markets where there is significant potential.

Ahold, the Netherlands-based food and grocery retail company, purchased a majority stake in Peapod in 2000 when the financially-strapped company was burning through cash and reeling from the resignation of its CEO — a sudden loss that prompted investors to pull a crucial $120 million investment.

A year later, Ahold, which operates stores under the Giant and Stop & Shop banners, bought the rest of Peapod— giving the struggling online grocer time to focus on improving operations rather than worrying about obtaining new sources of funding.

Ahold merged last year with Food Lion owner Delhaize to create a $40 billion retailer, effectively doubling the geographic locations Peapod could tap into for future growth. Today, Peapod continues to benefit from the company’s purchasing power, its extensive infrastructure network and other intangibles its rivals can’t access. Peapod, for example, can take unused storage space in a brick-and-mortar store and turn it into a mini-warehouse to complete orders for area customers.

Analysts have expressed concern for years that Peapod was accustomed to being the only player in several markets where Ahold has stores — and for that reason, it had little incentive to promote itself beyond its recognizable green delivery trucks. The company could embrace a conservative approach and methodically enter new markets when the time was right.

As online rivals build out their own businesses today, Peapod has stepped up its effort to boost brand awareness, highlighted by a massive marketing campaign in the New York City region. Dubbed “The Grocery Store at Your Front Door,” the campaign includes print and digital advertising as well as a contest for local artists to redesign the outside of a delivery truck. Peapod also is offering New York customers $25 off their first two orders and 60 days of free delivery. A larger nationwide campaign is expected later this year.

But with its competitors seemingly moving into new markets every few weeks, analysts say Peapod needs to decide how aggressively it wants to compete and challenge rivals that are establishing a fast and potentially insurmountable advanage in some areas

Instacart, which has expanded to Detroit and Las Vegas this year as part of its goal of reaching 80% of U.S. households by 2018, recently announced it was offering new customers in Texas and the Midwest free delivery for a year on orders of $35 and up. Instacart owns 50% market share in the third-party online grocery space and has deals in place with retailers including Costco, Publix, H-E-B and BJ’s Wholesale Club.

Shipt, which started in Birmingham, Alabama just three years ago, has leveraged its subscription model to quickly expand to 47 metropolitan markets with plans to double its reach during the next year. And AmazonFresh is now available in 16 cities after launching its service during the last year in Dallas, Chicago, Denver and Boston. Amazon also has easy access to millions of built-in Prime members it can leverage, not to mention the capital needed to move upmarket very quickly.

Even in cities where Peapod has long been a major player, its list of competitors continues to grow. FreshDirect announced in March it is planning to enter the D.C. market sometime in the near future, placing it in direct competition with other grocery delivery services such as AmazonFresh, Google Express, Instacart, Safeway and, of course, Peapod.

“Everyone is trying to have this service offered to shoppers,” said Symmes. Peapod is now finding it needs “to start to stand out against these trendier competitors. They are recognizing that it’s no longer enough to just be the oldest guy in the group. They have had so much time to get to know the space, but they have historically been slow to innovate and you’re seeing that catch up with them now.”

Still, the company has what amounts to a favorable head start as well as plenty of avenues for future growth. Peapod has yet to tap into the new markets Ahold entered through its merger with Delhaize.

Phil Lempert, a grocery industry expert who oversees Supermarketguru.com, said Peapod has done a good job training its employees to understand food and how best to select, package, load and deliver it — something he calls the company’s “secret weapon.” Peapod also has benefited from new executive hires with online experience including Bienkowski at eBay and Jennifer Carr-Smith, now the company’s president, who was previously chief operating officer of apparel retailer J. Crew.

The company is not immune to challenges from other upstart grocery delivery companies or the rapid growth of click-and-collect services being offered at many supermarkets, he said. But Lempert predicts Peapod will inevitably emerge again as one of the few companies to survive in the battle for online grocery supremacy.

Executives at Peapod are confident in the company’s ability to deliver groceries quickly and efficiently, but they are forthcoming about areas where they may lack expertise.

Peapod continues to benefit from the experience amassed during nearly 30 years of being in business and the close relationships it has with major food manufacturers, who are familiar with how the company works and its deep knowledge of the grocery delivery industry

What the future holds for the American mall