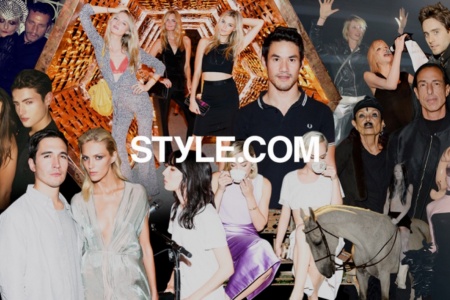 The company said in a statement on Tuesday that Style.com, a global multibrand e-commerce site in which it had reportedly invested more than $100 million, had ceased all trading operations. Effective immediately, visitors to that website will be redirected to that of its new partner, Farfetch, a rapidly growing online marketplace for high-end boutiques in which Condé Nast was an early investor.

The move is a stunning strategic backtrack by the publishing empire, which first announced a multimillion-dollar rebranding of Style.com, formerly the encyclopedic digital home of all Condé Nast runway coverage, in 2015. It also reflects the current turmoil in the glossy magazine industry, which has struggled to adapt to the digital age.

With increased competition from blogs, newsletters and other web-native publications over the last decade, alongside an industrywide plunge in advertising spending, traditional magazine publishers have had to plan aggressively on cultivating new revenue streams, with luxury e-commerce a particular focus. McKinsey & Company, the management consultancy, has predicted that online sales of luxury goods will triple in the next 10 years, and that by 2025, the online share of total luxury sales will reach 18 percent, or $78 billion. Hearst Publishing has experimented with a variety of different structures, from selling items off online editorial content (via Harper’s Bazaar and its ShopBazaar initiative) to maintaining its own inventory and online marketplaces. (Elle Japan has its own store.)

No e-tail venture, however, was as hyped as Condé Nast’s Style.com.

Yet despite extensive funding and a slew of starry outside hires — including the president, Franck Zayan, previously the head of e-commerce at the French department store Galeries Lafayette, and the fashion director Yasmin Sewell, a well-known industry consultant and street-style personality — the reincarnation of Style.com was plagued with rumors of problems from the outset.

The introduction was repeatedly delayed. Once the site was unveiled, numerous brands that were promised in the announcement, like Burberry, Chloé and Maison Margiela, were not actually present. There were widespread rumors of poor sales and reports of a staff exodus. A planned rollout of the shopping site to consumers in the United States this year never occurred.

Mr. Starker declined to comment on what had gone wrong; all sides appear keen to describe the new Farfetch partnership as an exciting “next chapter.” But the decision to pull the plug on Style.com suggests a humbling admission by Condé Nast executives that being a global authority on fashion, with a worldwide audience of more than 340 million readers, doesn’t necessarily mean you know how sell it — a lesson their fellow glossy executives might do well to observe.

That is where José Neves, the chief executive of Farfetch, who founded the platform in 2008, comes in. His company, which is based in London, acts as a marketplace and middleman between brands, independent stores and consumers. The company builds and maintains the websites for the labels, connects them to customers and then takes a percentage, in the double digits, from a vendor’s margin from each sale. But the vendor handles the inventory and shipping, reducing both the risk and cost for Farfetch.

This approach has made Farfetch the world’s top luxury e-commerce destination in terms of traffic, outperforming rivals like Net-a-Porter and MatchesFashion.com, according to data from the web analytics service Alexa. They currently work with more than 500 boutiques, in nine languages. Valued at almost $1.5 billion in its most recent funding round last year, it is reported to be planning an initial public offering in New York this year — the same period in which the company could become profitable.

Unlike its rivals, however, Farfetch has not had its own content-creation arm. Condé Nast will fill that gap, and Mr. Newhouse will join the Farfetch board of directors.

Neither man would comment explicitly on possible layoffs for the Style.com staff, other than to say that both Farfetch and Condé Nast would be interviewing the 75 Style.com employees to see if they could be absorbed. Currently, the only evidence of a partnership that consumers see is the redirect to Farfetch from Style.com. Farfetch has also acquired some of the assets of Style.com, including the domain and the current inventory.

By the third quarter of this year, and starting with Vogue and GQ in the United States, there are plans to offer Condé Nast readers the ability to browse and shop from magazine content, commercializing the editorial portfolio with items available to buy from Farfetch vendors. Condé Nast publications will also create shopping guides like “20 Summer Outfits to Wear in 2017,” which will appear on its magazine websites as well as at Farfetch and feature items that readers worldwide can purchase via Farfetch, with the magazine company receiving a cut of each sale.

“We’re not going to wait a moment to start,” Mr. Starker said. Though this arrangement could further erode the distinction between editorial and commercial operations once held dear to publications, the magazine editors who will create the guides will retain all editorial control over the product, Mr. Starker said, including the ability to choose items not available on Farfetch.

News of the deal comes at a time of heightened competition and volatility in the online luxury space, as new and established players jostle aggressively for market share. While there are several key competitors active in the sector, including MatchesFashion.com and 24 Sèvres, the boutique shopping website and mobile app introduced this month by the French luxury giant LVMH, the partnership between Condé Nast and Farfetch will reverberate through the fashion industry.

It also effectively sets up a head-to-head rivalry with the pioneer of high-end fashion e-tail, Yoox Net-a-Porter, currently a dominant player in the sector.

In February, Farfetch announced that Natalie Massenet, the founder of Net-a-Porter, would be joining its board 18 months after she acrimoniously walked away from the company she created, after it was acquired by its former rival Yoox. According to Mr. Neves, Ms. Massenet will now work with Anna Wintour, the editor in chief of Vogue in the United States and Condé Nast’s artistic director, and other team members in the race to link creative inspiration with commercial transaction most effectively.

Inside Peapod's plans to defeat its online grocery rivals