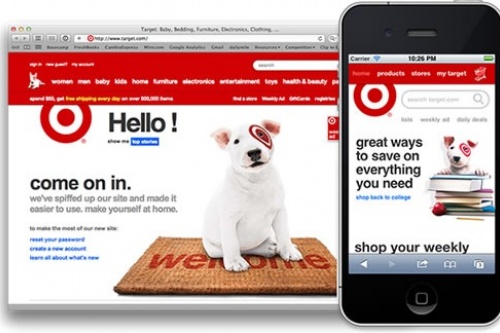 Amazon furniture general manager Veenu Taneja told The Wall Street Journal Thursday that the category is one of the fastest-growing and that the e-commerce giant is expanding its assortment.

Under a new plan, marketplace furniture sellers set their own pricing, which can vary according to the level of delivery chosen by the Amazon customer. White glove delivery (to a dry room) is the minimum — Amazon won’t accept drop-off at the door — but sellers can offer additional services like delivery to a customer’s “room of choice,” set-up and haul away.

Target on Thursday unveiled a shoppable, 360-degree virtual reality-like experience on its website, featuring curated living room looks in modern, farmhouse, mid-century or traditional styles and the ability to browse some 140 products, including rugs, sofas, wall hangings and decorative throws, in a virtual living room designed to help visualize the size, scale and styling of items, according to a company blog post.

Online furniture sales have emerged as a major growth area in
e-commerce, rising 18% in 2015, second only to grocery, according to
research from Barclays cited by The Wall Street Journal. Some 15% of $70
billion in U.S. furniture sales are now online, according to IBISWorld
data cited by the Journal.

Target, Amazon and even Ikea — which has been slow to e-commerce —
have joined Wayfair and stalwart Pottery Barn in moving to take
advantage of consumers’ openness to shop online for larger and
bigger-ticket items. Ikea for years largely eschewed e-commerce,
conducting the vast majority of its business through its big-box stores
and print catalog. The strategy has slowed the retailer’s overall
growth, and after reporting overall online sales growth of just 0.4% in
2014, Ikea pledged to increase e-commerce from about €1 billion per year
to at least €5 billion in the next five years, in order to meet its
targeted sustained overall growth rate of 10% per year.

For most retailers, fulfillment is becoming a major challenge considering online shoppers expect free or discounted shipping no matter what they buy. Fortunately for furniture retailers, there exists an infrastructure in local areas for delivery because even brick-and-mortar retailers have long shipped to customer homes from furniture manufacturing hubs or their warehouses.

Amazon already enjoys a 17% market share — and growing — in home furnishings, according to a Morgan Stanley report cited by the Journal. But Wayfair has been a “clear winner of market share” in the countries where it operates, according to a note from Neil Saunders, GlobalData Retail managing director, emailed to Retail Dive in February. Profits have been elusive for the e-commerce furniture and home goods retailer, as it continues to plow revenues into marketing and customer acquisition. First quarter net revenue, consisting of sales generated primarily through Wayfair’s sites, rose 32.1% to $940.4 million, though earnings amounted to a 48 cent-per-share loss, the e-commerce retailer said earlier this month.

Although Target has slimmed down its executive tech teams in
recent months, the company appears to be boosting its effort in
computer-generated imagery platforms, like the one unveiled Thursday,
noting that it’s doubling its team this year and hiring more than 40 CGI
experts.

US Retail Sales Rebound in April

Aldi says it's beating everyone on price, including Wal-Mart