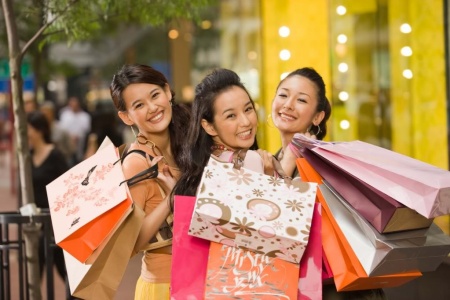 In 2017, Western luxury brands embarked on a migration in an eastern direction. To drive revenue, they had to more aggressively tap into the one region that has showed consistent sales growth, while the rest of the world’s luxury purchases have slowed: Asia, and China in particular.

Over the past several months, Gucci and Louis Vuitton opened e-commerce stores to sell directly to customers in China. Calvin Klein and Ralph Lauren shared plans with investors to increase their presences through e-commerce and physical stores, and work with influencers in China. The region’s biggest e-commerce marketplaces, Alibaba and JD.com, continued an arms race to win over luxury brands. During a Singles’ Day event for Alibaba’s consumer site, Tmall, luxury brands like Burberry, Tag Heuer and Rimowa promoted special offers for Chinese customers on the shopping holiday. The digitally shy Céline even set up a WeChat account to appeal to Chinese customers on the social app.

Since navigating an intricate consumer market like China can be difficult for individual brands, global luxury marketplaces and online retailers also helped shepherd them into the region. Farfetch, which sells inventory from 800 brands and boutiques, took an investment of $300 million from JD.com and formed a partnership to operate directly in China. L2’s data shows the percentage of fashion brands available through Farfetch in China increased from 76 percent in 2016 to 85 percent this year, while Yoox saw growth from 72 percent to 78 percent and Net-a-Porter increased from 48 percent to 57 percent.

Luxury brands, as they begin to establish direct connections with customers in China, are taking control over a market that was once dominated by a surging counterfeit and grey market. As the market matures, here’s what to expect from the evolving luxury e-commerce industry in China.

As Bain & Co. reported this year, while 30 percent of the world’s luxury purchases are made by Chinese customers, only 7 percent of those are made domestically. But, thanks to recent crackdowns in China on the daigou market in order to limit unauthorized sales and increase domestic purchases, Chinese luxury customers are spending more in China on luxury goods than they have in the past, a trend Bain & Co. expects will increase.

Rather than shy away from the domestic Chinese market, as they’ve done in the past, brands are confronting counterfeit head on, looking to squash out inventory heading to the grey market in China, and building up an official presence.

Other brands, including Ralph Lauren, Louis Vuitton and Gucci, worked with platforms like Alibaba to crack down on counterfeiters that sell on the platform, and continue to buy back inventory from unauthorized sellers.

Brands are working closely with China’s tech companies, including the e-commerce marketplaces JD.com and Alibaba, as well as WeChat, to get off the ground faster in a complicated market.

JD.com and Alibaba are both working with brands to offer them a suited selling environment on their platforms, including tailored brand pages, campaign promotion, and shipping and delivery logistics. Since they’re both mass marketplaces, building luxury hubs for high-spending customers has been a priority. JD.com, in addition to partnering with Farfetch,

Now that brands are setting up shop in China, the priority in 2018 will center around ensuring that the quality of the shopping experience is the same for Chinese customers, no matter where they encounter a brand.

JD.com provides a white-glove concierge delivery service, with same-day delivery, for its Toplife customers, which hints at the future of customer expectations. For brands like 3.1 Phillip Lim — which has a network of stores in China but doesn’t own its e-commerce operations, and only has 5 percent of sales there coming from online — JD.com is a powerful partner, because it can link online inventory on the marketplace to local stores. WeChat, meanwhile, is a prime tool for scheduling in-store appointments and bridging the gap between online and offline.

Retail in memoriam: The year in store closures