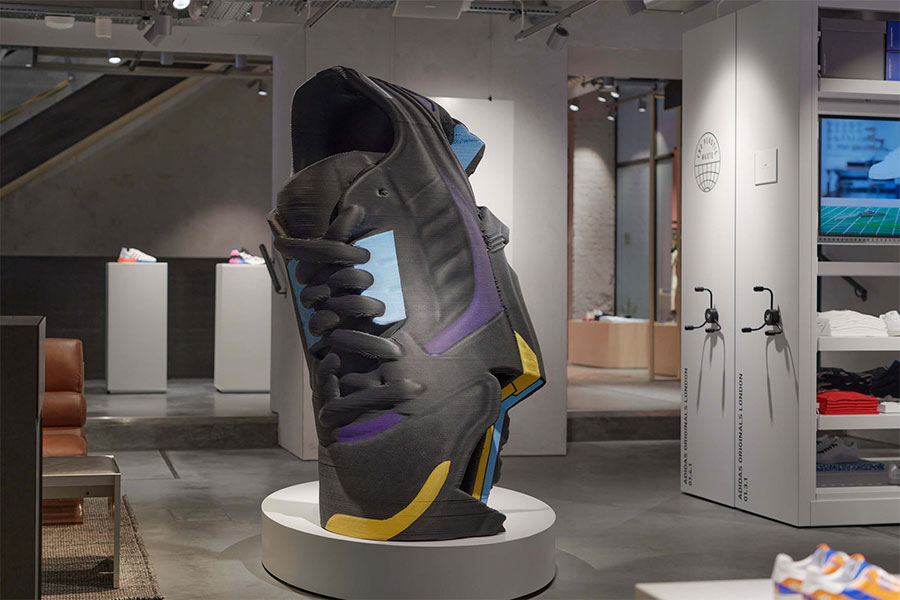 Gender neutral has been a buzzword in fashion for several seasons, but sometimes it seems retailers are only just getting to grips with the concept.

That makes the arrival of a gender-neutral Adidas concept store, which opens in London’s Soho district on 9 October, all the more interesting.

Unlike the 27,000 square metre Adidas flagship opened in 2019 on London’s Oxford Street, the Soho concept store is uniquely aimed at the 18 to 24-year-old Adidas Originals customer, says Chris Walsh, VP of Adidas UK. To engage this demographic, the company has focused on inclusivity and sustainability, he says, values which are more important to Gen Z than any other generation, according to McKinsey.

Brands have identified the need for gender-neutral retail spaces in order to engage Gen Z shoppers. However, adoption has been slow, says Dipanjan Chatterjee, vice president and principal analyst at Forrester. Gender-neutral retail is not new or niche, he points out, but fashion brands are still feeling out what they are comfortable with. “For a mainstream brand, it often comes down to a balancing act to serve their customer base, while trying to remain relevant to the consumer attitudes and preferences that are around the corner,” he says.

For Adidas Originals, it makes sense to present items by sport or theme, rather than gender, so customers can explore the full range and choose solely based on their taste, says Walsh. “People don’t want to be defined by what someone tells them is right for them or isn’t,” he says. “It used to be that pastel colours were very gender specific but we don’t see that anymore. We just produce the best shoes and allow people to adopt them however they want to.”

In a 2020 survey, Vice Media found that as many as 41 per cent of Gen Z respondents identify as neutral on the gender spectrum. This is translating into how they buy clothes: 56 per cent of Gen Z consumers already shop outside of their gender (or “cross-buy”), ignoring clothing labels and gendered sections, according to marketing agency Wunderman Thompson. “Brands and retailers need to understand that Gen Z don’t think of themselves in terms of boxes or binaries. And they don’t want brands to either,” says Emily Safian-Demers, the agency’s senior trends analyst.

The decision to merchandise the new Adidas store neutrally was driven by consumer research and feedback from young members of staff, says Walsh. “We try and be as adaptable as we can because obviously the world’s changing so fast.”

When luxury retailer Browns launched its East London outpost in Shoreditch, gender-neutral retail was a natural choice, says head buyer Ida Petersson. The Browns East store is aimed at a slightly younger, more local clientele than the Mayfair flagship and the company wanted to meet this audience where they are. “We started to see people cross-shopping more and more,” she says. “And when we looked at the collections, there was so much synergy between menswear and womenswear.” The impact of creative directors such as Gucci’s Alessandro Michele has spearheaded cross-buying among young men, she adds.

At the Browns Mayfair flagship, Petersson had noticed women were happy to enter the men’s section, but only a small number of men would venture into womenswear. “We wanted to make that journey easier for them and challenge the perception of what is a women’s collection and what is a men’s collection. In Browns East you don’t necessarily know.”

While merchandising at the new Adidas store is mixed, the store still features men’s and women’s sizing. This is a challenge for gender-neutral retail spaces in terms of stock, Petersson of Browns admits. But there are positives too. “The sizing spectrum helps the brand be more inclusive. A woman who wears a size 14 can fit nicely into a men’s large. Or customers who might have smaller or larger feet are served by the larger range of sizes and not deterred by the space in which they sit.”

Gen Z want spaces for themselves where they can really express themselves more authentically, says Safian-Demers of Wunderman Thompson. “Their choice of a brand goes far beyond a utilitarian fulfilment of needs. They’re not just going to Adidas to buy a pair of trainers. It’s really an expression and an extension of who they are and what they stand for,” she says.

A true pioneer in the gender-neutral retail space, Rob Smith launched New York store The Phluid Project in 2018, producing his own gender-neutral clothing and creating an inclusive community for gender-nonconforming customers. “The Phluid Project was a place where young people could gather and conversations would happen,” he says. “What I wanted to do was understand who the consumer was and build a relationship, especially with young people. We didn’t do any paid marketing, it was just word of mouth.”

The Phluid Project’s Broadway store has since closed, but Smith plans to take the concept on a pop-up tour across the world post Covid-19. The retailer’s e-commerce business is still operating.

Uniquely, the Adidas Soho store stocks hype products and exclusives that would typically be dropped online, to bring the hype experience of sneaker culture to real life and build community, says Walsh. Some new launches that the brand predicts will resonate with local Soho shoppers will be released exclusively in-store, he says, creating a community feel around the store and the kind of real-life “I was there” experience Gen Z consumers crave from trainers and streetwear. First up — a limited run of the highly coveted Elland Spezial, which typically sells out online within minutes. For Walsh, the store represents an opportunity to explore gender-neutral merchandising before a more global rollout. “You’ve got to learn, take feedback and constantly listen to modify your approach.”

Customers Still Like to Shop in Person, Even if They Get Only to the Curb