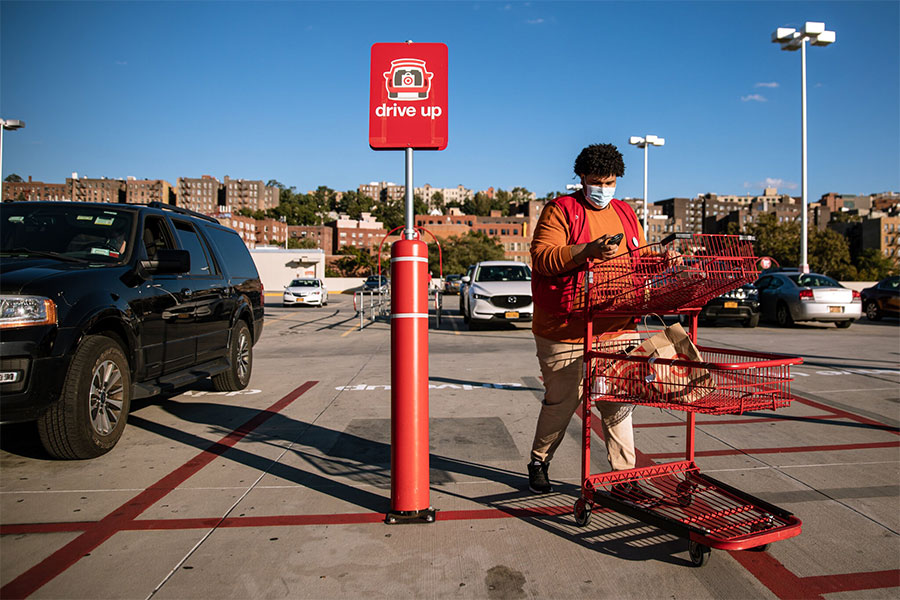 When the pandemic forced Dick’s Sporting Goods to close its hundreds of stores in March, the retailer hustled to set up curbside pickup within two days. Its initial attempt, though, was just this side of a children’s lemonade stand.

“When you drove up, there was a sign in the window with a phone number, and people used the landline to call the stores and they’d deliver it out,” Lauren Hobart, president of Dick’s, said of the “very scrappy” operation. Email and text alerts would come later.

Scrappy or not, curbside pickup not only rescued Dick’s sales during the lockdowns, it has also emerged as many retailers’ best strategy for long-term survival in the e-commerce age. And what started as a coronavirus stopgap is likely to have a permanent impact on the way people shop, along with giving them a new reason to continue to visit beleaguered physical stores.

The popularity of curbside pickup reveals that the future of retail is not just more packages piling up on people’s doorsteps. Beyond satisfying the need for contactless shopping in the pandemic, it taps into Americans’ desire to drive to a store, a pull that can be just as strong as, or even stronger than, the convenience of home delivery.

“Americans are used to their cars and actually do like stores, so this is kind of a hybrid where you’re getting the best of both worlds,” said Oliver Chen, a retail analyst at Cowen.

As of August, about three-fourths of the top 50 store-based retailers in the United States offered curbside pickup, according to Coresight Research, an advisory and research firm that specializes in retail and technology. Anything from a sweater to a book is now as easy to pick up as a sandwich.

Target said its curbside sales grew more than 700 percent in the last quarter, while Best Buy reported nearly $5 billion in online revenue in the second quarter, a company record, and said 41 percent of that had come from curbside or in-store pickup.

The rise in curbside pickup, part of a larger surge in e-commerce sales, has implications for preserving retail jobs, though workers’ duties are likely to transform. It is also helping to keep brick-and-mortar spaces relevant when thousands of storefronts have emptied out as more customers move online.

By driving to the store to pick up an online order, “the customer takes the last mile,” Mr. Chen said, referring to the typically expensive final step in package deliveries.

The rising popularity of curbside coincided with Amazon’s struggles with its vaunted supply chain and usually seamless home delivery system in the early months of the pandemic. As people rushed to place orders for everything from toilet paper to backyard swimming pools, Amazon dealt with out-of-stock items, price gouging and delayed or inaccurate shipments.

That was a boon for chains like Dick’s, Best Buy, Target and Walmart, which harnessed the merchandise in their thousands of stores to new effect especially as summer began.

“Amazon struggled a bit at the beginning like everybody did, because, boom, when the demand came, it was so great it hit the whole system and kind of overwhelmed it,” said Walter Robb, a former co-chief executive of Whole Foods and executive-in-residence at S2G Ventures, a venture fund focused on food. “Those that have been able to be agile on their feet with these digital offerings have made some gains.”

How can we help you lead a better, more fulfilling life at home during the pandemic?Ask us a question or tell us what’s on your mind.

But nowhere is the shift more significant than at big-box chains that also sell groceries. The 700 percent growth in Target’s Drive Up offering has spurred the chain to add fresh and frozen groceries to the service and create up to 12 additional parking spaces for pickup at stores. It has announced plans to double the number of store employees dedicated to in-store and curbside pickup services during this holiday season. The retailer has even included product samples in orders.

Walmart, with about 4,700 stores in the United States, was one of the earliest chains to offer curbside pickup, with a focus on groceries. Curbside orders are part of an overall boost in its e-commerce sales, which accounted for 11 percent of the chain’s revenue in the quarter that ended July 31, up from 6 percent a year earlier.

It’s helping the retailer keep pace with Amazon online, though the gap between the two remains large. Mr. Robb noted that Amazon seemed to be expanding its own physical footprint — through its ownership of Whole Foods and a partnership with Kohl’s — to match Walmart on curbside.

The drive-up service is giving Walmart and other chains another significant advantage — the ability to make a profit on online orders, where the economics are notoriously difficult. Target has said that its order pickup and curbside services at stores cost the company about 90 percent less on average than fulfilling orders from a warehouse.

On a $100 curbside order, the labor costs of picking the groceries reduce Walmart’s profit by $1.50 while still leaving $3 in profit, estimated Edward Yruma, an e-commerce analyst at Keybanc Capital Markets. By comparison, Walmart loses money on its traditional e-commerce sales, in which customers order online and the products are shipped to their home, Mr. Yruma said. In its recent second-quarter-earnings report, Walmart said that it had “significantly reduced losses” in its traditional e-commerce business.

Walmart now employs 74,000 workers across more than 3,000 stores to pick groceries on orders and then take them out to customers’ cars. Five years ago, there were fewer than 1,000 of those jobs. But during the pandemic, filling those roles was a big driver behind Walmart’s hiring boom, which increased the company’s 1.5 million-person work force by 14 percent.

That is a significant number for the nation’s largest private employer, particularly at a time when the economy has been shedding jobs.

But some retailers are not hiring more employees to pack online orders — they are simply adding these tasks to the workers’ workloads without increasing their pay. In fact, many retailers have ended the raises and bonuses that workers were receiving in the early months of the pandemic, a decision labor groups have criticized because workers now face both heavier workloads and the threat of contracting the virus in the store.

“If you are having an increase in sales and in productivity, the workers should share in that benefit,” said Marc Perrone, president of the United Food and Commercial Workers union, representing tens of thousands of grocery store workers. “Right now, the owners of these companies are the only ones benefiting.”

Labor experts and Wall Street analysts also predict that the job of picking items off the shelf and taking them to a customers’ cars can easily be done by machines, which means that the boom in jobs may be fleeting.

Even now, that work is highly automated. Workers fulfilling curbside orders at Walmart use a hand-held device that indicates the order in which they should pick each item, for maximum efficiency.

“They can sometime feel like robots,” Mr. Perrone said.

A recent report by the Labor Center at the University of California, Berkeley, and the nonprofit Working Partnerships USA predicted that workers would come under new pressure as stores began to resemble Amazon warehouses, and noted that “stock clerks’ jobs seem destined for more radical change than any of the other major retail job categories.”

“On the store floor, they also will be more frequently prompted by ‘alerts’ to replenish stock,” the report said. “As with cashiers, this could make stocker jobs more varied and interesting, but in combination with new ways of tracking work, it also could result in jobs that are surveilled, closely watched, sped up and stressed.”

Jean-André Rougeot, chief executive of Sephora Americas, said that on a recent visit to Walmart, he saw more employees pushing carts for pickup orders than he did shoppers. He anticipates that people will return to Sephora’s stores to touch and try its beauty products, but acknowledged that the pandemic would transform how people shopped and received goods.

“Every grandparent in America knows how to use Zoom now because that’s how they spoke to their grandkids for the last six months, so it’s not just young people,” Mr. Rougeot said. “The whole population has become much more comfortable with technology and the ability to order things differently.

“There’s a whole group of consumers that literally discovered e-commerce during this period,” he added. “These people, because of Covid, started to do that, and I don’t think you can put the genie back in the bottle.”