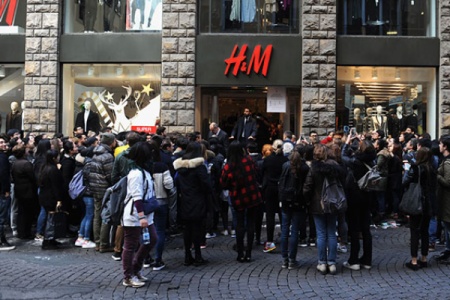 Most shoppers have probably heard of Zara, H&M, Uniqlo, Aldi or Lidl, all retailers that ventured into the U.S. after they found success overseas.

Now, the number of international retailers — apparel brands, grocers, cosmetics companies and more — looking to move to America is growing at a rapid clip, industry experts have told CNBC. But making a splash in a new country isn’t easy, even for well-established brands. H&M and Zara, for instance, had to pull back on opening new stores as sales rocketed online and foot traffic disappointed in certain cities. There’s often some trial and error involved, as shoppers’ taste preferences vary by market.

“We see many international retailers reluctant to come to the U.S. [after] you’ve seen big retailers take longer to resonate here than elsewhere,” said David Zoba, chairman of the global retail leasing board at commercial real estate firm Jones Lang LaSalle. “It’s not an overnight success.”

Still, there are plenty of brands preparing to make the leap. It’s an opportune time, considering the amount of vacant storefronts and the number of older retailers going bankrupt.

Many of these companies are getting a chance to test the U.S. market by selling goods at a pop-up exhibit called “The Edit” at the Roosevelt Field Mall on Long Island, New York. Simon Property Group, the mall’s owner, last month announced the latest round of brands rotating into the space, and all but one came from overseas.

Many international brands are leveraging their e-commerce expertise to generate bigger sales when they finally do move to America. They also tend to operate on the forefront of proven retail trends by opening smaller stores and pushing fast-rotating inventory.

“If you have a unique product or you’re luxury, that’s what has done the best in the U.S.” so far, Zoba said. “I really think the future [of retail] will have more … international brands.”

Here are seven international retailers looking to grow in the U.S.:

Having opened its first store in Dublin in 1969 and growing steadily in Europe since then, Primark is just starting to make its mark in the U.S. The clothing and accessories retailer now operates a handful of stores in New York, New Jersey, Pennsylvania, Massachusetts and Connecticut. With some of its locations, Primark has partnered with Sears Holdings to move into unwanted space in high-demand and high-trafficked malls, like Staten Island. While the retailer is still looking to build brand awareness in the U.S. before opening more stores, real estate landlords tell CNBC they’re excited to bring Primark into their properties

L:A Bruket is one of eight international brands now housed at The Edit. The Swedish brand sells homemade spa products like soaps and scented candles. L:A Bruket can also be found at J. Crew and Anthropologie, among a handful of other established U.S. retailers. The company is testing its stand-alone shop at Simon’s mall before embarking on further expansion.

Some of malls’ vacant storefronts will come back to life with nontraditional retailers. Mexico-based KidZania plans to jump into the market soon, and shoppers should expect to see more experiential-play offerings across the U.S. KidZania currently runs 24 entertainment centers worldwide and will make its debut in America in Dallas, Chicago and New York by next year. Inside a KidZania location, kids role-play in interactive cities, managing their own money and learning about various careers.

Parfois is another tenant at The Edit, where it’s operating its first U.S. shop. The Portuguese women’s fashion and accessories brand has more than 700 stores around the world, having amassed a loyal following among shoppers in Europe. Parfois is most famous for its eclectic handbags and wallets.

Compagnie de Provence makes soaps, fragrances and other home care products, all naturally sourced from Marseilles, France. It’s currently operating at The Edit, and upscale department stores such as Nordstrom and Bloomingdale’s also carry some of its products. Like many beauty brands today, the company is experimenting with running its own storefront. Expect to see more of Compagnie de Provence’s shower gels and shea butter on shelves soon

Superdry has been making its name known in the U.S. since opening its first location in New York’s NoHo neighborhood in 2009. The spunky British apparel retailer, famous for its Japanese design flare, now has a handful of locations in the Northeast and on the West Coast. It also runs locations in Florida, including some that offer thriftier goods in outlet centers. Superdry is experimenting with some shops in the U.S. dedicated entirely to sports apparel. The co-founder of the retailer, Julian Dunkerton, recently left the company but said Superdry is about to embark on “ambitious growth plans.”

Europe-based Bershka is another effort from Zara’s parent company, Inditex, and it’s testing a retail presence in the U.S. in New York’s SoHo neighborhood. It opened a shop there last year and targets a slightly younger audience than Zara. The SoHo shop is only scheduled for a temporary run, allowing Bershka, which sells apparel and accessories, primarily for women,

to test the U.S. waters. Bershka has already built a loyal following of shoppers overseas, especially in Spain. If the American store finds success, there could be more to come.

New retail mashups hark back to the rise of the mall