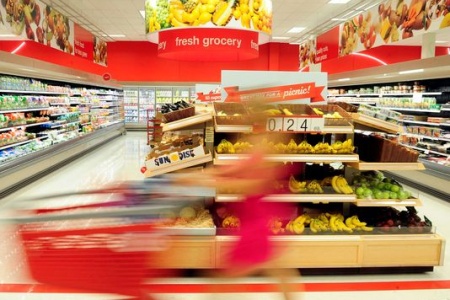 Head-turning retail mashups and sleeping-with-the-enemy-style pairings — from Aldi grocery stores on Kohl’s turf to Anthropologie shops at Nordstrom — are rocking the retail sector, as stores scramble to woo finicky, choice-rich consumers in a marketplace upended by the limitless store that is e-commerce.

The deals reflect a variety of strategic plays by retailers, be it a bid for product categories outside a merchant’s core competency, like food for Kohl’s, or reaching for that elusive cool factor, such as Walmart’s implicit courtship of younger and hipper shoppers via its collaboration with media platform BuzzFeed on a kitchenware line.

They echo the frenemy deal that hogged the retail headlines much of last year: Amazon’s acquisition of natural grocer Whole Foods.

“It’s a new world of partnerships,” said Jill Standish, senior managing director of retail at Accenture. Merchants are looking at ways to grab a new set of consumers while testing how two retail brands might or might not co-resonate.

These partnerships are turning some retailers into the multipurpose-shopping concept that gave rise to the mall, said Helaine Suval, a partner with retail consultancy Collective Growth Partners. That is, “trying to attract customers and potential foot traffic with the recognition that [other retail brands] will create additional sales.”

Nordstrom bowed Anthropologie Home products at 15 of its full-line stores and on Nordstom.com last month. The retailer will bring its boho-chic aesthetic to Nordstrom’s more traditional stores via 200 products ranging from dinnerware and bedding to home décor.

The Anthropologie line also marks Nordstrom’s latest collaboration with retail brands that include Top-Shop, J. Crew’s Madewell and online menswear etailer Bonobos, all aimed at crafting a “differentiated retail profile” by serving as a “distribution-destination partner,” according to a research note by J.P. Morgan retail analyst Matthew Boss.

Walmart is launching the Tasty cookware line with BuzzFeed, looking to piggyback on the buzz of the media property’s hot video-recipe series on its Tasty comfort-food network while tapping into its younger, social-media minded audience.

The average age of a Walmart shopper is 45 to 54, while BuzzFeed says its audience reaches 3 out of 5 U.S. millennials monthly. Tasty boasts more than 92 million Facebook fans and 73 billion lifetime video views.

The partnership will extend to additional consumer products as well as “e-commerce, media and marketing and more,” according to a Walmart press statement.

The Walmart/Buzzfeed pairing is the latest in a series of surprising acquisitions by the world’s biggest retailer as it pushes into higher end and higher-priced fare to woo younger and more affluent shoppers. These include the purchase of vintage-apparel upstart Modcloth.com and its deal with Lord & Taylor to sell the high-end department stores’ goods on Walmart.com.

Germany’s Aldi is spreading what industry consultant Victor Martino dubs its “austerity chic” grocery concept, which will be a co-tenant with Kohl’s Middle-American department stores this year. Aldi’s upscale, low priced food will be tested in the real estate of the department store’s downsized stores.

Just as Kohl’s has partnered with Amazon on in-store Amazon kiosks, adjacent Aldi grocery stores reflect a move to boost foot traffic and draw a shopper that might never have been in a Kohl’s, Suval said.

Meanwhile via Kohl’s, the grocer gains another avenue via to spread its U.S. wings, with plans to add 150 more Aldi stores stateside this year, Jason Hart, Aldi CEO, told me in January.  Exploring “innovative real estate strategies” is integral to that goal, an Aldi spokesperson told me. “To bring more ALDI stores to the convenient locations our shoppers’ desire, we’ve worked with Kohl’s and identified a handful of new stores that will be adjacent to existing Kohl’s locations.”

Against the backdrop of an overstored U.S. shopping landscape and as online shopping hampers brick-and-mortar growth, Pottery Barn (and its West Elm division earlier) is turning to overseas markets to uncork new revenue streams by building a wholesale business on foreign shores.

For Barnes & Noble Education (a separate company from the bookstore chain), the pact leverage its college division’s “unique access to students and parents from the moment of acceptance to move in day, and allows us to bring Target’s college essentials to our nearly 800 college campuses across the country,” Lisa Malat, CMO for Barnes & Noble College, told me.

Global retailers look to the US for future growth