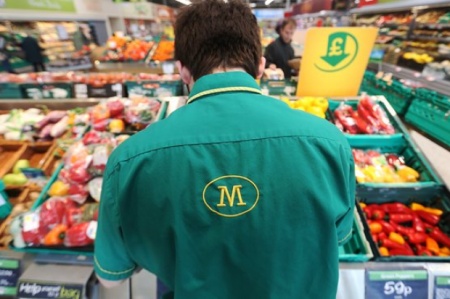 TJX’s stock was up more than 1 percent, while shares of Burlington were up close to 2.5 percent on the day. Burlington has been the biggest gainer of the three of late, having climbed more than 8 percent in 2017.

Here’s the argument for off-price retail: Amazon’s encroachment into the apparel industry more closely resembles a full-price department store, instead of a Ross or TJ Maxx model, JPMorgan’s Boss said. He cited the internet giant’s Prime Wardrobe pricing structure as an example, saying the fashion focus at Amazon instead looks to mirror companies like Macy’s and J.C. Penney.

Since 2011, department stores have lost roughly $25 billion in sales on a combined basis, and are on pace to lose another $22 billion in sales over the next five years, should the downward trend continue, JPMorgan found.

Off-price retailers, on the other hand, have gained $14 billion since 2011, the firm said.

JPMorgan has upgraded Ross Stores to overweight, giving the stock a fresh price target of $74 per share, up from $65. The stock was trading near $63 per share Monday morning.

An important point to also be made is just how difficult the off-price model — offering a treasure-hunt type experience — would be for Amazon to copy online, Boss emphasized in his report. He cites “high barriers to entry” to tapping into the concept successfully.

“The model is difficult to replicate with over 1,000 buyers worldwide currently sourcing from 18,000 vendors in 100+ countries,” he said.

“If I was Amazon, I don’t think I’d be looking at the off-price space as my big opportunity,” Ross Stores chief operating officer, Michael O’Sullivan, said at an investor conference earlier this month.

“I think within the world of retail, especially given the economics … I don’t think off-price is really the place where I’d focus my energy,” O’Sullivan added about Amazon. “Doing a treasure hunt online is much more hit or miss, because you are not actually seeing — or you’re seeing it, you’re just not experiencing the product in a same way that you would if you were in a store.”

At a time when many retailers are shuttering stores to get back to a “healthy” footprint, off-price companies have plans to open more doors in the years ahead. TJX even recently rolled out an entirely new nameplate, Homesense, in the United States. JPMorgan has called out Ross’ long-term store target of 2,500 locations as being “conservative.”

“The growth runway for ROST is well beyond 10 years,” he said, adding that — based on meetings with Ross’ management team — JPMorgan believes real estate landlords are more willing to partner with Ross today, especially given the “fall-out” in the sporting goods and office space.

Ross Stores, TJX and Burlington are each forecasting same-store sales growth to close out the year — not something many retailers can promise in such a volatile market today.