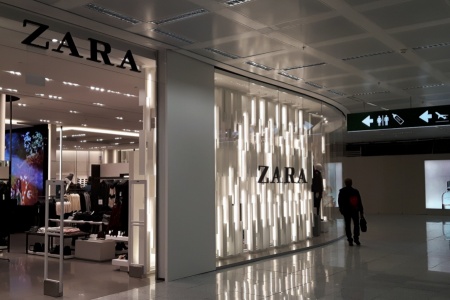 Zara has opened an eco-friendly flagship in the heart of Manhattan’s SoHo neighborhood. It is the Spanish retailer’s eight location in Manhattan.

In keeping with the aim of Zara’s parent company, Inditex Group, to have 100% eco-efficient stores by 2020, the three-level 47,361-sq.-ft. flagship uses “highly demanding” sustainability measures across all its processes, along with energy-efficiency features and recycling.   As a result, it will consume 30% less energy and 50% less water compared to a conventional store.  Zara has applied to the U.S. Green Building Council for LEED (Leadership in Energy and Environmental Design) certification for the project.

The store is located in a building that was built in 1878 and is considered one of the emblematic structures in the area known as the SoHo Cast Iron Historic District, named for the widespread use of iron. It was designed entirely by Zara’s architecture team, who worked to recover the building’s landmark features, including its original cast iron façade, interior and brick wall. (Inditex bought the building in 2015.)

With the opening of the SoHo space, Inditex now operates 71 Zara stores, along with four 4 Massimo Dutti stores, in the United States.

The most interesting supermarket in the world