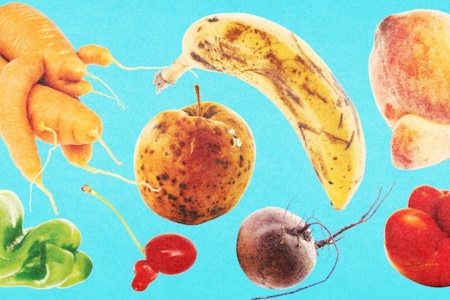 Food waste has met its most innovative opponent yet, a new supermarket in Denmark, where the vegetables are dirt cheap—and too ugly or old to sell elsewhere

.WeFood, which opened in Copenhagen this week, stocks only food that is past its official expiry date or unworthy of other supermarket shelves because of aesthetic imperfections and damaged packaging. The grocer, opened by Danish NGO Folkekirkens Nødhjælp, is hoping to lure shoppers of all socioeconomic backgrounds by selling its food at steep discounts—somewhere between 30 to 50 percent cheaper than other standard supermarkets.

The new supermarket is a not-so-subtle swing at the modern food system, which often prioritizes food safety at the expense of waste. Roughly one-third of all food produced worldwide ends up in the garbage, complicating efforts to alleviate hungry around the globe. But the problem is especially pronounced in developed countries, thanks in large part to stigmas attached to unappealing fruit and vegetables and overly conservative expiration dates.

In Denmark, the unreasonable standards send 1.5 billion pounds of edible produce to landfill, undermining efforts to bring nutrition to households that struggle to put food on the table. Elsewhere, the consequences are even more grave: In the United States, for instance, some 70 billion pounds of food were wasted in 2012, 20 percent more than was wasted only a decade before. Americans, rather incredibly, throw out more food than plastic, paper, metal, and glass, a fact that reflects poorly on the country’s fussiness about eating only the freshest foods possible.

In order to fill its shelves with unwanted but perfectly edible food, WeFood has established a web of partnerships with local supermarkets and butchers, produce importers, and even manufacturers of organic granola bars, according to The Independent. It has also won the support of the Danish government, which publicly lamented the country’s contribution to food waste.

“It’s ridiculous that food is just thrown out or goes to waste,” Eva Kjer Hansen, the Danish minister for food and environment, said at a recent event organized by WeFood. “It is bad for the environment and it is money spent on absolutely nothing.

”The news comes on the heels of what has already been impressive progress by the Scandinavian country, which has managed to reduce food waste by 25 percent in just five years, according to a recent government report. It also follows an unprecedented announcement by France last year. The European country’s parliament voted unanimously to make it illegal for supermarkets to throw away any food that is considered edible. As of this coming July, large supermarkets in France — those approximately 4,300 square feet and larger — will either have to donate the food to charity or make sure it’s used as animal feed. Retailers that fail to comply will face fines of up to $82,000.

The launch of WeFood follows a pledge by the European Union to reduce food waste by 50 percent by 2025. If the steep discounts the supermarket is dangling succeed in making ugly and expired food in something people buy, the model could serve as an example onto developed countries throughout the region, and even the world.

Most popular luxury brands according to social media ranking