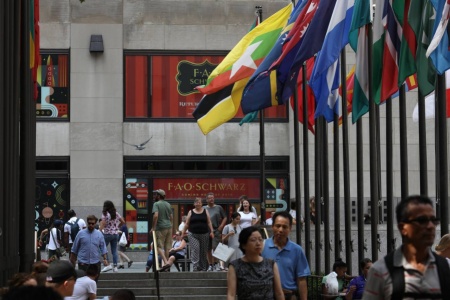 FAO Schwarz is looking for a few good toy soldiers.

A dominant presence in Midtown Manhattan for decades before its closure in 2015, the toy store is coming to life again with a new, 20,000-square-foot Rockefeller Center location, set to open in November. ThreeSixty Group Inc., a California-based firm, acquired the retail brand from Toys “R” Us in October 2016 for an undisclosed price and has since launched an ambitious campaign to revive it on a global scale.

The New York store will be key to that strategy, said officials with ThreeSixty Brands, the ThreeSixty Group affiliate in charge of operating FAO. But in an era when bricks-and-mortar retailers struggle to stay competitive as consumers increasingly go online for their shopping needs, FAO is making its Rockefeller Center location as much about the experience as the buying.

And that dance-on piano made famous in the Tom Hanks movie “Big”? It will be back, with some dancers ready to tap out a few tunes.

In recent years, the retail world has embraced the experiential model. For example, RH, formerly Restoration Hardware, has opened a number of expansive, gallery-style stores across the country, including some that incorporate restaurants. A new one in Manhattan’s Meatpacking District is set to open in September.

Not that the FAO relaunch at Rockefeller Center will come cheaply. ThreeSixty Brands officials won’t discuss the construction cost of the new store, which is in a prime location overlooking Rockefeller Plaza, including the area where NBC’s “Today” show is produced. They also declined to reveal the financial terms of their lease with Tishman Speyer, the real-estate giant that owns Rockefeller Center.

But the store is in one of the priciest commercial locales in the city. Asking rents average $3,200 a square foot in an adjacent area that is tracked by real-estate services firm CBRE Group Inc. By contrast, the Meatpacking District, a hot spot of sorts, has average asking rents of up to $501 a square foot.

It is also perhaps worth noting that the toy business has faced its share of challenges of late, especially as children focus more on technology and computers than physical toys. There is also the collapse of Toys “R” Us, which once had a massive Manhattan store, located in Times Square, replete with an indoor Ferris wheel.

Ultimately, ThreeSixty Brands may not be looking to make a profit on the Rockefeller Center store so much as use it to promote the FAO name, said Jed Wexler, a retail expert who runs 818 Agency, a New York firm.

In any case, the New York store, which will be considered the FAO flagship, is part of a larger push. ThreeSixty Brands is also launching a smaller store at LaGuardia Airport this fall and one in China in 2019.

How Nike and REI made experiential retail a strategy