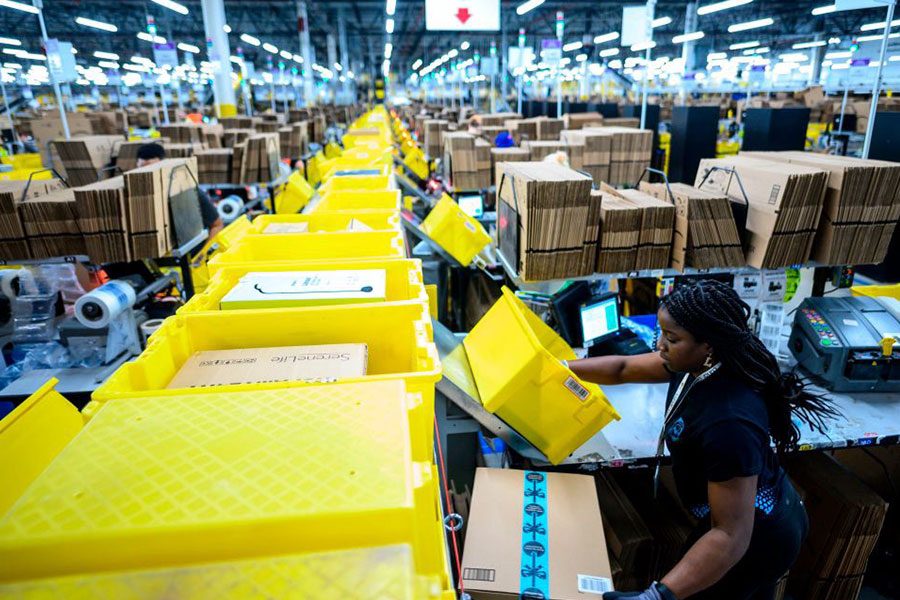 As restaurants, bars, and local shops close down, platform-based monoliths are vacuuming up customers and jobs.

here are always parties who profit in times of crisis, and so it goes with our ever-accelerating global pandemic. For toilet paper manufacturers and supermarket chains and, say, a pair of grifter brothers hawking Purell at an obscene markup, the coronavirus has been good for business. But the biggest beneficiaries in the long term may be Amazon and the tech companies that follow its lead.

On Monday, the online retailer announced it was hiring a staggering 100,000 workers at $17 an hour minimum — $2 higher than usual — to help meet the exploding demand from socially distant shoppers. Much of the rest of the economy, of course, is in a tailspin: Airlines and hotels are sitting empty, small businesses are getting hammered, and the service industry is experiencing mass layoffs. Waitstaff, bartenders, hairstylists, local shop workers — millions of Americans are, until further notice, without work. Amazon itself shuttered its service to companies delivering nonessential products and services, affecting innumerable businesses.

U.S. Treasury Secretary Steve Mnuchin warned Congress that without a sizable stimulus package, unemployment could rise as high as 20% by the end of the pandemic. One in five workers say they’ve been fired or had their hours slashed. Restaurants are going under, fast. The financial intelligence firm Moody’s Analytics estimates that nearly half of all American jobs are at risk.

Amazon is well aware of the economic destruction going on outside its walls and makes it central to its hiring pitch: “We also know many people have been economically impacted as jobs in areas like hospitality, restaurants, and travel are lost or furloughed as part of this crisis,” Dave Clark, Amazon’s senior vice president of Worldwide Operations, wrote in the company’s hiring announcement. “We want those people to know we welcome them on our teams until things return to normal and their past employer is able to bring them back.” Of course, depending on the extent of the economic damage Covid-19 wreaks, that might well be never.

In a scenario as dire as that, Amazon’s moves this week could prove presciently symbolic for a permanent transfer of traditional jobs at local small businesses to unreliable, part-time work for tech giants that distribute products and services through online platforms — the “Amazonification” of our economy.

This Amazonification is already underway. The consumer shift to online retailers away from meatspace malls and boutique shops has been the subject of hand-wringing and prognostication for years, and, if anything, the evolution was moving slower than many feared. Walmart, after all, remained the world’s largest retailer long after fears of Amazon’s dominance had become mainstream. Warehouse automation, a key goal of Amazon, was advancing but not yet leaving humans out in the cold by any stretch of the imagination. Yet Amazon caught up in 2019, and if anything, this coronavirus-fueled surge may accelerate its supremacy over the retail market.

While 100,000 new Amazon jobs will have a minuscule impact on a soaring unemployment rate, it’s what the shift symbolizes that’s of note.

The average small business only has enough cash on hand to operate for 27 days without going under — when the 2009 recession kicked into full gear, nearly 2 million local small business jobs were lost. And today, the online e-commerce architecture is far more sophisticated and prepared to absorb their customers. This time, if small businesses die, many might stay dead. Bookstores, for one example, are already struggling to stay afloat, and it’s only been a week. Notably, Powell’s Books — long the dominant independent alternative to Amazon, even in online sales — is laying off most of its staff as the coronavirus lockdown begins.

For one, Amazonification means an increased reliance on precarious, part-time labor in the form of seasonal and highly replaceable warehouse workers or Flex delivery drivers, who work grueling hours with no benefits. We’ve seen this model not only at Amazon, of course, but also at Lyft, Uber, Instacart, and DoorDash, which, as the virus’s spread began, offered workers who weren’t feeling well a choice between putting themselves and others at risk to go to work or staying at home with no pay or cushion of support. After public outcry and political pressure, companies like Instacart have moved to adopt some meager measures of support for sick workers: They can accrue paid sick leave by putting in hours, and they can obtain paid leave if they get an official to designate that they contracted Covid-19. But good luck getting your hands on a test if you’re not Tom Hanks or a starting NBA point guard.

Amazonification also means monopolistic control over platforms that can make or break businesses on a corporate whim. Take the company’s announcement that it would be suspending shipments of all nonessential items, many of which come from third-party sellers. It was yet another blow to innumerable small businesses and demonstrated the vast power Amazon has over the fortunes of the companies that count on its platform to find customers.

It’s a good example of why the theorist Langdon Winner argues “technology is legislation.” This decision has sweeping consequences for the livelihoods of thousands of people, but Amazon alone controls the rules.

I’ve reached out to Amazon to try to get a sense of what criteria goes into deciding what is an essential good — and thus able to be sold over its platform — and what is not. The company did not clarify the distinction on the record. But we have seen the dramatic impact the decision has had already. As one seller wrote, “Amazon just put tons of businesses out of business. Destroyed thousands of jobs amidst a crisis,” according to Vice. “Horrible joke. Absolute joke. No warning. Expect major lawsuits coming from sellers who now will go bankrupt.”

Amazonification may also eventually mean fewer jobs. The company is working toward a vision of automation designed to inspire investor confidence, stoke public fantasy, and keep laborers from agitating for higher wages. Amazon has said that its warehouses will be fully automated by 2030 — and whether it makes that benchmark or not is almost beside the point. It is certainly investing heavily in robotics and productivity software. Certain tasks, like sorting products, have already been automated, though others, like picking items off shelves, have not. Meanwhile, the looming threat of mass robotization depresses wages as workers are dissuaded from organizing and threatened with replacement. And the promise of total automation keeps investment capital flowing. After all, a perfectly efficient human-free logistics company is the stuff of corporate wet dreams.

To wit, many companies in China have seized the coronavirus pandemic as an opportunity to introduce labor-saving machinery and new automation measures — factory lines for companies with simpler assembly tasks and workplaces with automatable jobs may be completely transformed by the end of the outbreak. Companies like Google are deploying software automation at scale, too.

This is an ideal time to experiment with corporate automation, after all — the downside of introducing job-replacing machinery and programs is that it tends to generate social unrest and anxiety. But if said anxiety happens to be maxed out already due to a certain global pandemic, then alas, perhaps your job will be handed over to an algorithm before you have a chance to complain about it. (This might happen even if the machine or algorithm is not, in fact, capable of doing your job — plenty of work will be given over to shitty automation that humans will have to toil to clean up later.)

Finally, Amazonification will mean privatization and the tech sector taking over public services like health care. Before the coronavirus crisis, Amazon had already been incubating a massive health care operation, partnering with Berkshire Hathaway and Chase to launch a primary care clinic for employees called Amazon Care. In the midst of the pandemic, Amazon Care is exploring how to team up with the Gates Foundation to deliver test kits in Washington state.

This is perhaps the clearest invocation of a techified shock doctrine — Naomi Klein’s term for how corporations use public disorientation in the face of a collective shock to advance their aims. A private tech company rewriting the rules on the fly, filling a void left by disaster and government ineptitude, and potentially establishing a new norm in the process: Amazon facilitating health care operations. Needless to say, the transfer of public services to for-profit enterprises rarely bodes well, especially when it comes to matters of human health. (See: Flint, Michigan.)

But this could be part and parcel of our new economic reality should we cede it to Amazon and its ilk amid the fog and confoundedness of the coronavirus.

It’s not hard to look at the immediate outcome of the coronavirus social distancing measures — the shuttered storefronts and restaurants and the delivery drivers parked outside ghost kitchens tailored to cater to GrubHub — and see a future in which a consolidated Amazon dominates retail and online commerce to an extent even greater than it is today. I personally know at least a half-dozen people who have already lost their jobs and work, some of whom are currently relying on the freeze-in evictions to remain in their homes with their families. For many, the pandemic itself is likely only going to be the first phase of catastrophe.

Just as the coronavirus may have given us a preview of the future texture of self-isolating white-collar work, the way business and consumers respond to the pandemic may be a harbinger of the future of wage labor, too. That is, it may be even further distributed, precarious, algorithmically governed, partially automated, and carried out in service of a handful of sprawling corporations. Companies that have shed employees, automated roles, and picked up the slack with gig workers, may never hire back the workers the lost. The economy could be dominated by precarious work, monopoly tech platforms, and semi-automated systems to an extent even greater than it is now. And then the Amazonification of the planet will be complete.