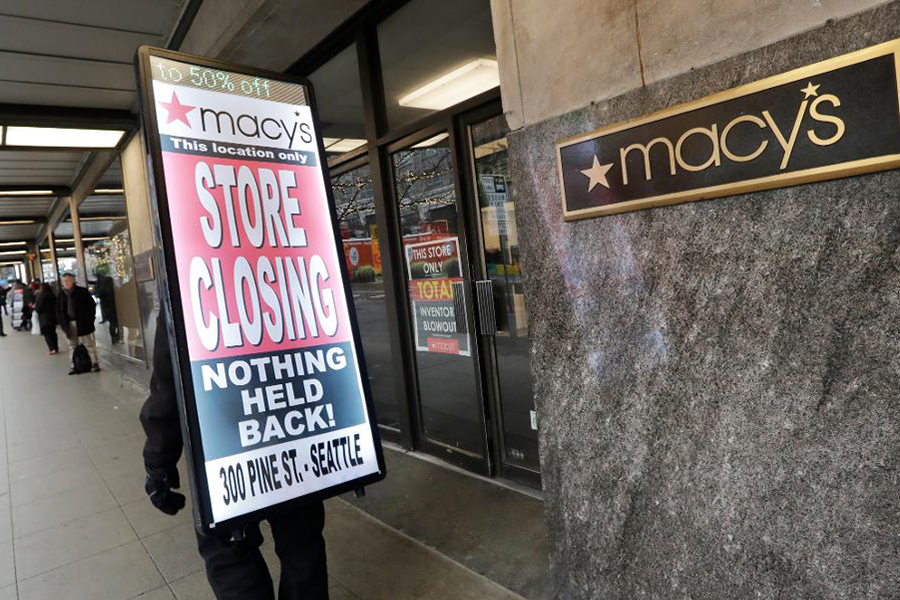 In a normal time, financial people focus mostly on income statements and earnings, earnings, earnings. But when survival is at stake, they turn more to balance sheets. In layman’s terms: When it’s about survival, how much you’ve made in the past is not as important as how much cash you have on hand to live through a crisis.

Companies will need cash to get through the coronavirus shutdown, and what comes after it—especially if the recovery ramp-up is shallow, as now appears likely. Companies that have liquid assets and other assets to borrow against are going to come through. Companies without access to cash have a questionable future.

Macy’s is the largest of the traditional department stores (by sales). When you look at Macy’s balance sheet, everything looks pretty good:

In spite of all that, there is a clear path following this shutdown that leads Macy’s to an existential pivot point. Here’s how I could see it playing out:

The coronavirus shutdown ends and Macy’s reopens stores and hires back its people. Stores that were questionable at the time of the shutdown don’t reopen. But the inventory on hand is now old and out of season. To move it out, Macy’s cuts prices drastically, far more than usual. (A good explanation of the problem by Walter Loeb is in this article.) Eventually the products are sold, but it’s a turnoff to Macy’s most desirable customers, the ones that want new and fashionable merchandise. Macy’s presses its vendors for discounts, but many of them will be unable to withstand both that pressure and the costs of the shutdown, and they will vanish. Macy’s winds up moving a lot of goods to liquidators and discounters like Ross Stores, TJ Maxx, Burlington Coat and its own Backstage stores.

Between the shutdown costs and the markdowns, Macy’s losses are staggering. Management, knowing that big losses will happen in 2020 no matter what, writes down everything it can to position itself for a better 2021. The loss for 2020 is $1 billion or more. Management provides for that by drawing on existing credit lines and debt goes up by $1 billion or more. As 2020 ends, Macy’s has a weak fourth quarter on account of the economy in general and the poor experience consumers had when Macy’s was forced for months to sell deeply discounted, out-of-season merchandise. Macy’s ends the year with huge losses and poor prospects for 2021.

At that point, Macy’s likely needs more capital to take more losses and it turns to its lenders again. While the balance sheet says the assets are there to be borrowed against, lending at its root is about one thing: confidence. When lenders lose confidence in the business, most won’t lend and those that do want both airtight security and higher interest rates.

In Macy’s case, we are already seeing it as their debt was recently cut to “junk” status. When the factor community (the lenders who lend to department store vendors based on the strength of the retailer) sees Macy’s lenders concerns, they get skittish. They raise rates or they refuse to guarantee receivables from the department store.

At the same time, Macy’s real estate loses value as collateral because there are no more anchor tenants being created and very few alternative uses for Macy’s space in malls without a repurposing of the whole facility. That’s when vendors start to decline orders and a death spiral begins—without new goods, no customers and soon, no company.

Macy’s did not respond to a request for comment on this scenario.

You may ask: Why would this be true for department stores and not other retailers? Well, look at Macy’s turnaround plan, which it announced on February 4, a short time ago but well before anyone thought the coronavirus crisis would be what it became.

Macy’s put noble goals into its plan, including strengthening customer relationships, curating quality fashion, accelerating digital growth, optimizing its store portfolio and resetting its cost base. All those things are great, but what they don’t talk about is what customers want. There’s no mention of the key terms that are motivating customers now, like healthful, artisanal, local, ethical or sustainable. Macy’s focuses on its own goals but doesn’t mention its customers’ goals. That’s the ultimate reason it keeps missing its targets. No amount of moving the pieces around will ever substitute for senior management focusing an organization laser-like on the values that customers are looking for. In a nutshell, that’s what Macy’s and other big, legacy retailers keep missing.

Or you may say, so let Macy’s become an off-price retailer. Good idea, but not so fast. Neither its management skills nor its cost structure are suited to compete against the leaders in that category, who are purpose-built to sweep up the deals in off-price and move them out to consumers efficiently.

Companies with balance sheets that are strong enough and who are responding to market needs will be survivors. The ones who only have balance sheets and don’t tune into the evolving needs of their customers will find that the coronavirus is a hammer blow that leads them closer to the end.

The Cascade Of Store Closures

If Macy’s and one other big, anchor retailer like Neiman Marcus (reportedly preparing to file for bankruptcy protection) or the long-struggling JC Penney shuts down, some stores will benefit from the diverted traffic, but there will be a massive, negative ripple in other ways.

Many specialty stores located in malls have clauses in their leases that allow them to walk away at no cost if half the anchors in the mall go dark. Stores that aren’t profitable will take advantage and malls will lose many of their most lucrative leases. It will be nearly impossible to repopulate those stores with new tenants, especially in malls that aren’t A-class.

You may be reading this and asking, ok, but when could this happen? The big, legacy retailers will make it through 2020, and they will mostly struggle through 2021. When the first calendar quarter of 2022 rolls around and the numbers are reported for fourth quarter 2021, it will be clear that certain big retailers aren’t recovering the way they need to. That’s when the collapse will come.

One of the questions I keep hearing retail investors ask is: Can anything be big again? Macy’s is a $25 billion company today; at another time in retail history you would have assumed that if Macy’s shuts down, it would be replaced by something else just as large. That’s not what we’re seeing.

For many reasons, the consumer marketplace is increasingly carved up into ever-smaller niches and companies are created to meet the needs of each niche. Since their target markets are small, they can’t become $25 billion behemoths. So while there’s no definitive answer to the question yet, indications are that it’s tougher than ever for a big enterprise to emerge on the scale of Macy’s.

One of the reasons large retailers have not been nimble is the enormous capital commitment, in the billions, they must make to inventory. Especially in the fashion business, it’s easy to make inventory mistakes that have to be sold at cost or below. Liquidation of retail store mistakes is one of the reasons that the flash sale business exists (RueLaLa, Gilt) and the large amount of inventory needed to be liquidated when the shutdown ends will be a shot-in-the-arm for them.

One of the things we’re seeing now is the formation of marketplaces where the company selling the product to consumers doesn’t own what’s being sold. EBay and Amazon are examples of that, but there are many more—and not just in the virtual world but in physical spaces.

For example, there’s Neighborhood Goods, a three-store retailer (New York, Austin, Dallas) that collects a monthly fee to merchandise brands’ products in their store, as well as Leap, which opens and runs stores for brands like Thakoon and Ledbury.

Showfield’s, meanwhile, rents out spaces to brands—think less like a mall or more like an exhibition space. B8ta leases spaces inside other stores, and sells brands the right to display in its space, primarily curating an assortment of interesting gadgets. Lionesque Group finds, designs, opens and operates pop-up shops for brands.

And online marketplaces are proliferating as well, such as Farfetch, which connects consumers with over 1,000 luxury goods sellers (its customers are mostly outside the U.S.) and Orchard Mile, which offers the full collection of many high-end designers including fashion, beauty, home, kids and more.

Legacy retailers have also gotten in on the act. You may not be aware of it, but you can go to entire floors in a department store where the retailer itself owns no inventory and employs no people. Everything is leased out to individual brands who run what is really their own stores within the department store. Beauty departments in department stores have been run this way for many years.

We are all programmed to believe that what we are used to is permanent. Our instinct tells us that the world can’t get along without the institutions we’re accustomed to. None of that is right. The world is getting along just fine without Toys R Us, Payless Shoe, Shopko, Gymboree, Barneys New York and many more. Their competitors are perfectly happy to take their place and you don’t hear consumers crying about it.

My fellow Forbes.com contributor Pam Danziger wrote about the list of retailers that are on bankruptcy watch. Some of those will recover, but at least some of the companies on that list will not be here when the full outcome of the coronavirus shutdown is tallied. For those brands and retailers that don’t make it, now may already be too late to save them.