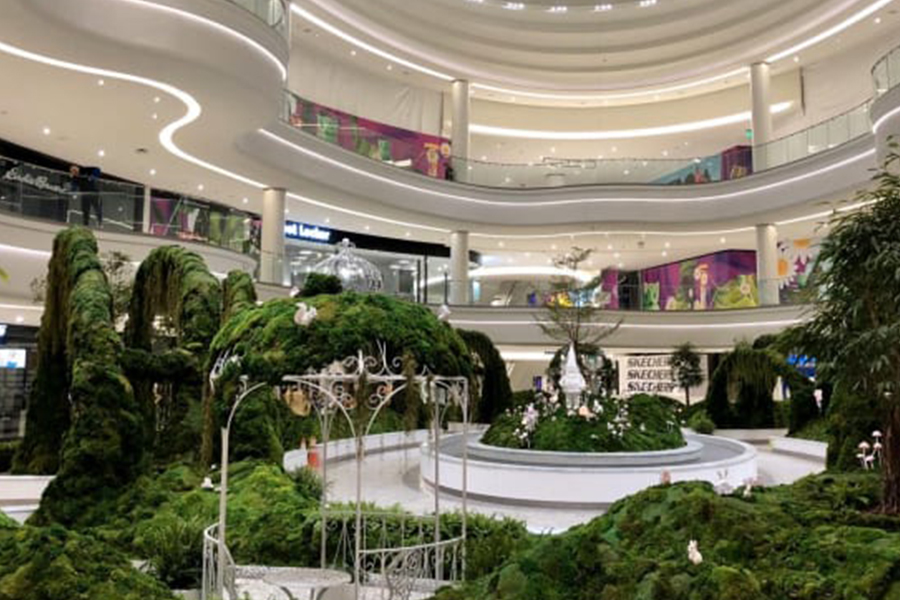 It is becoming even harder to call American Dream a megamall.

Instead, the roughly 3 million-square-foot development that sits alongside a bustling highway in East Rutherford, New Jersey, is morphing into more of an ultimate amusement park. More like Disneyland if it fit under one roof. With shifts in strategy over time, retail is becoming even more of an afterthought, while entertainment takes center stage.

Prior to the coronavirus pandemic hitting the U.S., American Dream was slated to be a mix of 55% entertainment-related tenants and 45% retailers, when it was completely finished. Now, the project will be roughly 70% entertainment and 30% retail, according to its developer, Triple Five Group.

American Dream shifting its leasing strategy amid this pandemic could serve as the most damning evidence we have seen against the retail industry to date. The property, years in the making, has helped to take the pulse of retail as long as it has been under construction.

When ground was broken in 2004, under the project’s original developers, Amazon’s ascent and the e-commerce boom was just beginning. Names like Circuit City, Sports Authority, Blockbuster, RadioShack and Toys R Us were still in business. American Dream’s blueprint has, as a result, been rewritten time and time again.

Now, this project will also be the true test for consumers paying for touch-and-feel experiences, once coronavirus restrictions are lifted. Will people want to ride roller coasters? Ride down water slides? Go ice skating within 6 feet of someone else? Play put-put? American Dream will teach us.

“We are going to come out of this super strong … really strong on the entertainment side,” Don Ghermezian, co-CEO of American Dream, told CNBC in an interview. “I think when [coronavirus] is over, people will be so stir crazy. Initially there will be some trepidation … but I think we are going to have so many people.”

Up until March 13, when Triple Five Group announced it would be temporarily closing American Dream to try to help halt the spread of COVID-19, what had already opened there was a Nickelodeon theme park, an NHL-regulation-size ice skating rink, and an indoor snow park for skiers and snowboarders that had opened in the winter. The only retail at American Dream, so far, had been a towering IT’SUGAR candy store.

On March 19, a first wave of retailers like Zara and H&M were anticipated to open their doors to the public, in addition to the world’s first DreamWorks Animation Water Park. But all of that, along with the final construction at the property, has been delayed until further notice. A fresh reopening date has not been set, with the entire country still uncertain when this pandemic will subside.

Coping with its own losses, American Dream has furloughed “most staff” and cut the salaries of others, according to Ghermezian. “This has cost us a lot of money,” he said.

But the one silver lining in the situation — if there ever was one — has been being able to rethink the future of American Dream, the co-CEO said. As of March, the development was not yet fully leased, giving Triple Five Group flexibility to reassess the new deals it wants to sign.

‘A lot of retailers aren’t going to reopen.’

“They cannot handle having no income coming in,” he said. “And some of them are furloughing. It is a very difficult time. I fully expect there will be records set for retailers’ closing [in 2020]. This virus has exacerbated that situation. A lot of retailers aren’t going to reopen.”

Ghermezian said no retailers have backed out of American Dream to date. The property is slated to have a Saks Fifth Avenue department store in the luxury wing, along with a variety of high- and low-end retailers including Ulta, Lululemon and Old Navy.

Now, instead of adding even more apparel and shoe stores, American Dream will have a trampoline park and one-of-a-kind, Instagram-worthy museums, where visitors can pay to spend an afternoon exploring themed rooms with extravagant props and backdrops, Ghermezian said, citing these as two examples of what is to come post-COVID-19.

American Dream is also zoned for 3,500 hotel rooms, with plans to construct several hotels that will connect directly to the rest of the project via skybridges. The hotel operators have not yet been announced.

The purpose of adding this space, according to Ghermezian, is to give out-of-town visitors easy access and room to spend a night or two during their excursions.

To be sure, after living for weeks — or months — in social isolation, being advised to wear face masks and ordered to stay at minimum 6 feet away from anyone else, it will likely take many consumers additional time to ease back into day-to-day life, as they remember it, before coronavirus.

Also, many people are being put out of work — either temporarily furloughed or permanently laid off — by closures related to the outbreak.

The wave of Americans looking for unemployment insurance skyrocketed at the end of March, as more than 6.6 million new claims were filed, bringing the total of Americans who have filed to roughly 10 million over the most recent two weeks, according to the Labor Department. And the unemployment rate in the U.S. has risen to 4.4% — from 3.5% — its highest level since August 2017.

But the situation will grow much worse before it gets better, according to analysts. Goldman Sachs has forecast that the unemployment rate will peak at around 15% later this year.

“I think it will take a while for people to get comfortable,” Mizuho Securities analyst Haendel St. Juste said about consumers going back to America’s malls.

Until recently, it has been in commercial real estate landlords’ best interests to bring “experiences” to malls, St. Juste said. “But now experiential equals human risk. Humans are not going to the mall.”

“In theory, yes, it’s still a good idea to build assets with things people cannot do online,” he added. “Ultimately we will see fewer malls.”

Skeptics also still abound that American Dream will ever be 100% completed. Mall of America owner Triple Five Group took over the project, when it was named Xanadu, in 2011. Construction has been stalled and restarted on and off for years. Opening dates have been pushed back. The coronavirus has drawn out, even further, an already extensive timeline.

Coronavirus Could Be What Finishes Off Several Big Department Stores