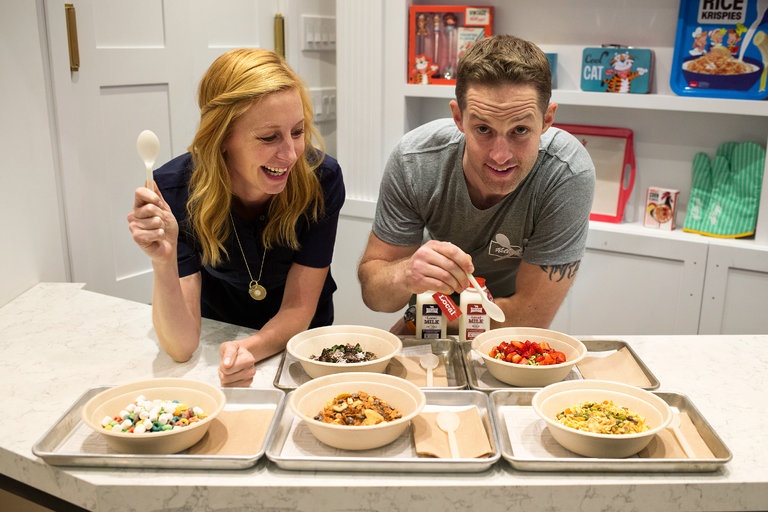 In a brave new world of breakfast food, replete with to-go bars and microwaveable sandwiches, companies like Kellogg’s and General Mills have seen their cereal sales decline over the past decade.

Now, in hopes of helping its customers to rethink cereal, Kellogg’s plans to open a branded boutique in Times Square on Monday, charging Manhattan prices — as much as $7.50 — for bowls of Frosted Flakes and Raisin Bran.

The cereal will be garnished with foodie flair — like lemon zest and green tea powder — to help justify those prices.

“It’s all about honoring tradition but looking differently at a bowl of cereal,” said Anthony Rudolf, who will operate the store, called Kellogg’s NYC.

Mr. Rudolf said that given the quality of the ingredients, the bowls were cost-appropriate.

The cafe will also offer prizes to customers, mostly trinkets and tchotchkes, but occasionally something bigger, including tickets to the Broadway musical “Hamilton.”

Some of Kellogg’s more sugary cereals will be available in ice cream sundaes that will cost up to $9.50.

Christina Tosi, the founder of the popular Milk Bar bakeries, who has plenty of experience working with breakfast cereals, developed the menu.

Kellogg’s said that it was Ms. Tosi who first introduced the brand to Mr. Rudolf, who started his career in fine dining before founding his own company, Journee, which helps educate food industry professionals about the business.

When initially reached by phone on Wednesday, Mr. Rudolf was in Spanish Harlem buying a week’s worth of passionfruit jam for the cafe.

Pressed to describe the store, he said that he had shied away from the concept of a breakfast bar, and that the cereal store would not be overly branded or Times Square-bombastic.

Mr. Rudolf was very reassuring on the subject of sogginess — always a worry for consumers of corn flakes and mini-wheats — saying that the store would never dare to pour customers’ milk for them.

“Are you kidding?” he said. “I’m not going to mess with your milk. That is such a personal thing.”

The store will join other branded boutique cafes in Manhattan, including the Chobani store in SoHo and a planned Pepsi restaurant called Kola House in the meatpacking district.

Andrew Shripka, the associate director of Kellogg’s marketing, said Kellogg’s NYC was an attempt to leverage the history of a 110-year-old brand for a new approach.

“We do have a lot of people that love the nostalgia and history of Kellogg’s, but we don’t want to just rest on that nostalgia,” he said.

“I’m guessing they lose a lot of money on this, but they probably lose a heck of a lot less money than what they would be spending on advertising to get that same brand awareness,” he said.

He cited the success of Mars’s M&M retail stores, an empire centered on the bite-size chocolate candies.

“You never know whether these things are going to be a success or failure,” Mr. Stanton said. “But you have to give Kellogg’s credit for trying to do something different in a category that’s dying.”

Asked whether tourists would be willing to pay more than $5 for a bowl of cereal, Mr. Stanton simply said, “New York City is a strange place.”

Why Barnes & Noble is getting into Beauty