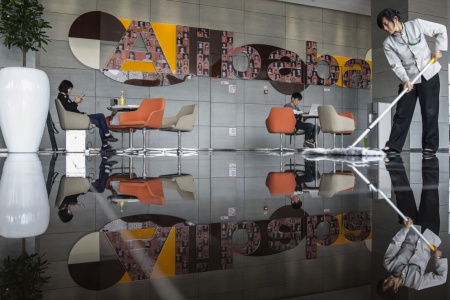 Wal-Mart Stores Inc has begun rolling out specialized carts designed to keep employees out on the floor culling produce and reducing wastage, the latest step in a push to improve its fresh food offerings and revive sales growth.

The world’s largest retailer has deployed what it calls “quality carts” at 500 stores and plans to have them in all of its nearly 5,000 U.S. outlets by the end of the third quarter, Vice President for Central Operations Shana DeSmit told Reuters in an interview.

The carts, equipped with weighing scales and a box to collect the discarded produce, will help employees carry out tasks that were typically carried out in the back room, she said. With the carts, employees can sort fresh produce by removing items nearing expiration and weighing them to manage inventory counts and help with replenishment. Wal-Mart’s service levels have suffered due to fewer employees in store interacting with consumers.

DeSmit said the retailer is introducing one such cart per store and will eventually add more. The produce collected through the carts is either donated or sold through markdowns.

A renewed emphasis on fresh food, which includes produce, deli items, meat and baked goods, has been a crucial turnaround strategy under U.S Chief Executive Officer Greg Foran. Wal-Mart is the largest grocer in the United States, with nationwide sales of $167 billion last year.

In recent months, Wal-Mart has started revamping the layout of the food section at 3,000 stores, including super­centers and its smaller Neighborhood Market stores. It has taken steps such as lowering display cases and opening up floor space so that shoppers can see more clearly across the food area, and has replaced black plastic crates with ones that look like wood to give the store more of a farmer’s market feel.

In February, the retailer said it would hire hundreds of fresh food managers to improve its offerings. The company is on schedule to have such managers in a third of its stores nationwide by the end of the year, Wal-Mart spokesman Lorenzo Lopez said.

Cereal Gets Makeover at Kellogg’s Store in Times Square

Steinhoff gets its European deal with $800 mln Poundland buy