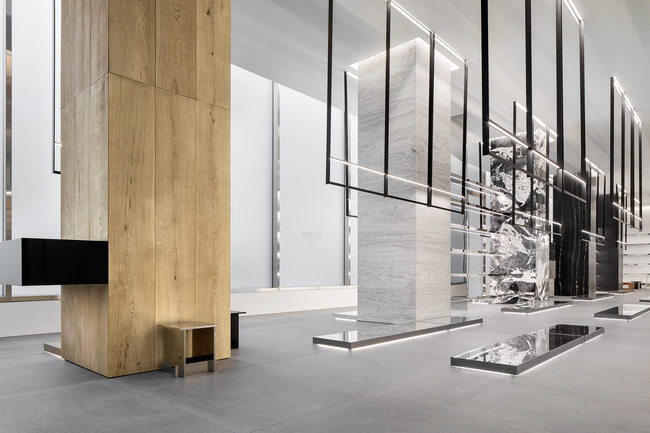 Featuring veined marble, mirrors, sleek metallic lines, geometric rigour and minimalism, Celine‘s new Hedi Slimane-signed store concept looks a lot like the one that the designer came up with for Saint Laurent when he was the brand’s creative director. It does, however, incorporate some new features, such as a grey basalt floor and wooden accents. The brand new layout was unveiled in New York with the opening of a new Celine flagship at 650 Madison Avenue.

This boutique replaces the old Celine store located at number 870 on the same avenue. The new flagship is spread over a single storey, occupying a long, rectangular space measuring 450 square metres, and housing the brand’s men’s and women’s ready-to-wear and accessories collections. The store also features location-specific installations made by artists James Balmforth and Jose Dávila. Having taken the creative reins of the LVMH-owned Parisian label just over a year ago, Slimane is continuing with his plans to remould Celine along the same trajectory that the designer followed for the relaunch of Saint Laurent. The process began with the release of a first set of images in black and white that channelled a minimalist aesthetic tinged with the underground rock edge so dear to the star designer. This was followed by the resetting of the brand’s accounts on Instagram and other social networks, the transformation of “Céline” into “Celine” with a new logo, the release of the designer’s first men’s and womenswear collections for the label, and now a new store concept.

The objective for the fashion house, which is led by Séverine Merle and boasts 140 boutiques around the world, is to double its revenues to 2 billion euros or more in the next five years. 2019 will also see openings in Los Angeles, London, Milan, Shanghai and Beijing, according to a release from the brand.