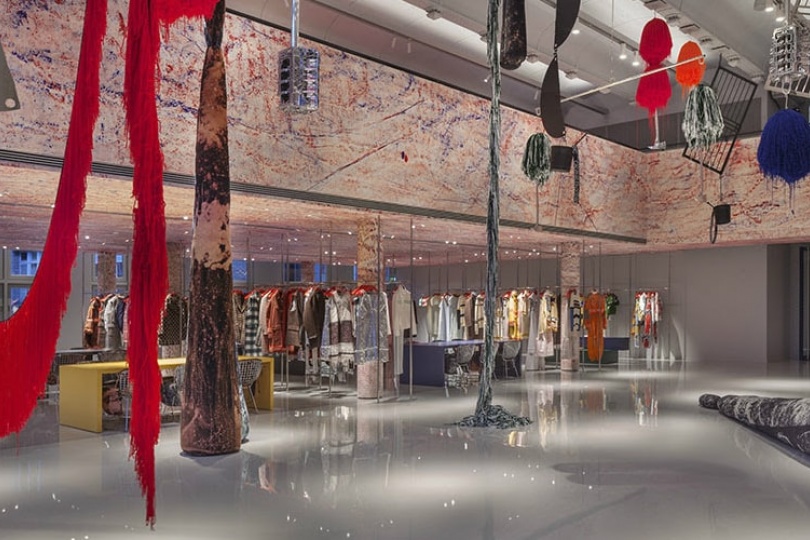 The new Parisian headquarters inaugurated on 2nd March by Calvin Klein, to showcase the PVH group’s premium label Calvin Klein 205W39NYC in the French capital, look more like an art gallery than a showroom. They are located on the Rive Gauche, at 103 rue de Grenelle, while Calvin Klein also has offices in the heart of the city, at 137 Rue du Faubourg-Saint-Honoré.

Artist Sterling Ruby, a long-time collaborator of the label’s Creative Director Raf Simons, has completely revamped the 1,500 m2 space. “At the request of Raf Simons, Ruby has transformed the two-storey premises in an immersive, floor-to-ceiling environment, inspired by the previous work he did for Calvin Klein in New York,” said the label in a press release.

Ruby in fact added his personal artistic touch to Calvin Klein’s media showroom at the label’s New York headquarters, and to the Madison Avenue flagship store. His creative contribution, including a series of sculptures, now lends a decidedly arty feel to Calvin Klein 205W39NYC’s new Paris showcase, set in a historic building, giving remarkable visibility to the brand.

Calvin Klein’s other lines are still run from the label’s European headquarters, based in Milan.

J.Crew partners with WeWork and LinkedIn