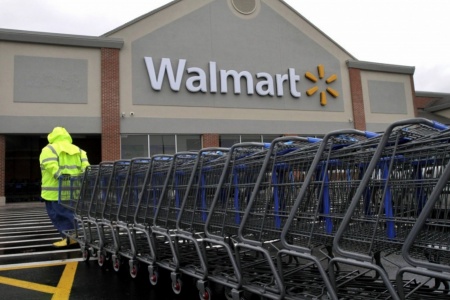 Walmart plans to significantly slow its efforts to open new U.S. stores, a strategic shift by the world’s largest retailer as it works to claim more of the shopping dollars that are rapidly moving online.

At a meeting with investors, Walmart executives said the chain will open about 35 supercenters next year, sharply lower than the 60 it expects to open by the end of the current fiscal year. It aims to open just 20 of its smaller, grocery-oriented Neighborhood Markets, a pullback from the 70 it is to open this year.

Instead, Walmart said it would work to increase sales by ramping up growth in its online division and squeezing more business out of its roughly 4,600 U.S. stores. The goals executives laid out for its digital business were ambitious: They say they expect to deliver 20 to 30 percent annualized growth in a segment that lately has not shown nearly that level of momentum. For example, last quarter, Walmart’s global e-commerce sales were up 11.8 percent over the previous year. In the last full fiscal year, the company’s online sales were up 8 percent.

“This company, over time, is going to look like more of an e-commerce company,” Doug McMillon, Walmart’s chief executive, said at an event at corporate headquarters in Bentonville, Ark.

The big-box chain recently moved to boost its e-commerce firepower by acquiring upstart shopping site Jet.com and by installing that company’s founder, Marc Lore, as the head of Walmart’s online shopping strategy. Lore and McMillon spoke repeatedly of a focus on “basket economics.” This means that they want to find ways to incentivize customers to bundle their online orders, scooping up several items at a time. This behavior would slash shipping and fulfillment costs for the retailer, thus allowing sales in this channel to be more profitable.

This tack would be different from the one that e-commerce leader Amazon.com has taken: that company has instead focused on getting shoppers to pay $99 a year for Prime memberships. Because shipping is free for members, these shoppers sometimes place several orders a day, one item at a time.

Investors sent Walmart’s stock down about 2.5 percent in afternoon trading, apparently disappointed by the financial forecast the retailer offered for the year ahead. Walmart said it expects earnings per share in the next fiscal year of between $4.29 and $4.49, about flat compared to what it anticipates for the current year. In the year after that, it expects 5 percent growth in earnings per share.