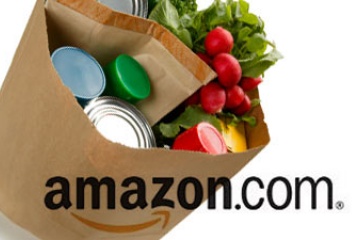 Amazon.com is pushing deeper into the grocery business with plans to introduce convenience stores as well as curbside pickup locations.

The Seattle company aims to build small brick-and-mortar stores that would sell produce, milk, meats and other perishable items that customers can take home, these people say. Primarily using their mobile phones or, possibly, touch screens around the store, customers could also order peanut butter, cereal and other goods with longer shelf lives for same-day delivery.

For customers seeking a quicker checkout, Amazon will soon begin rolling out designated drive-in locations where online grocery orders will be brought to the car, the people said. The company is developing license-plate reading technology to speed wait times.

The grocery stores, known internally as Project Como, are for now slated exclusively for customers of its Fresh subscription service, which promises same-day food delivery at set times, the people said. Last week, Amazon dropped its $299 annual price for Fresh and instituted a $15 monthly fee, available to members of its $99-a-year Prime delivery service.

The new stores are designed to capture the large share of people who prefer to pick out their produce or bring home their groceries on the way from work. Amazon aims to compete more directly with grocery discounters, as well as Wal-Mart Stores, which has recently been expanding its own pickup sites.

Groceries account for about a fifth of consumer spending, but online grocery purchases make up only about 2% of U.S. grocery sales, according to Morgan Stanley Research. They estimate the online grocery market could more than double to over $42 billion this year. In a Morgan Stanley survey of U.S. consumers in October of last year, 8% of people said they got fresh groceries delivered and 26% expected to do so this year.

Grocery sales may be crucial to the company’s growth because Americans restock their refrigerators each week, and that could provide opportunities to sell more profitable items alongside orange juice.

U.S. households average more than one-and-a-half grocery store visits a week, racking up $107 in goods, according to the Food Marketing Institute. That is roughly $5,500 a year, more than double the $2,500 Amazon Prime members spend annually with the web retailer and 10 times what nonmembers spend, according to Morgan Stanley estimates.

But grocery delivery is even more complex than delivering the average package. Grocers must keep food cold, manage large orders and schedule them within tight delivery windows, said Ivan Hofmann, a transportation industry consultant and former FedEx executive. Drivers may end up driving around in circles if customers aren’t home for deliveries, adding up miles and fuel.

“There’s just so much variability in the grocery delivery model, that it’s always going to be a more costly delivery, and it doesn’t lend itself as easily to economies of scale as packages do,” he said.

Amazon has cautiously rolled out its Fresh service after testing it in its hometown for nearly six years, extending it to seven U.S. cities and London since 2013. Handling perishable items, such as ice cream in the summer heat, is tricky, and the business is costly, requiring expensive refrigerated storage that thins profit margins.

Groceries would represent the latest effort by Amazon to upend a new market to become a central hub for shoppers and businesses. Amazon has taken an early lead in cloud computing, and has branched out into its own clothing labels, snack foods, consumer electronics, videogames, television shows and movies.

Brick-and-mortar stores are a newer addition to Amazon’s arsenal after two decades of centering its business on the dot-com operation. Last year, Amazon opened its first bookstore in Seattle, and plans a handful more across the U.S. It is weighing other brick-and-mortar store concepts, like a showcase for its consumer devices, said two of the people.

For its planned convenience stores, Amazon is drawing inspiration from discounters like Aldi and Lidl, as well as dollar stores, which are expanding in the U.S. with spartan stores, private-label inventory and few employees, according to the people familiar with the matter.

Amazon’s convenience stores may take a year or more to open while the company scouts locations, and may be shelved because of financial or operational concerns, the people said.

With curbside pickup, Amazon will have to contend with Wal-Mart, which plans to bring the service to nearly a quarter of its roughly 4,600 U.S. stores by the end of next year, executives said on a conference call last week.

“We’re going to be really focused on winning in fresh and consumables over the next couple years,” said Marc Lore, head of Wal-Mart’s e-commerce. Wal-Mart recently paid $3.3 billion for Jet.com, the e-commerce company Mr. Lore founded in 2014.

Amazon may be just weeks from opening its first drive-in grocery location in Seattle, one person said. Documents uncovered by tech site GeekWire indicate Amazon is behind a storefront being built there, which would let customers schedule 15-minute to two-hour windows to arrive for pickup.

Beyond Wal-Mart, Amazon faces a broad swath of competitors in grocery delivery, from national supermarket chain Safeway Inc. to regional companies like FreshDirect LLC and fast-growing startups such as Instacart Inc.

Amazon is being careful to avoid following the fate of Webvan Group, the online grocery company that during the dot-com boom burned through more than $800 million in less than three years as it went public, filed for bankruptcy and then shut. Several former Webvan executives work at Amazon.

Business Walmart to pull back on new store openings