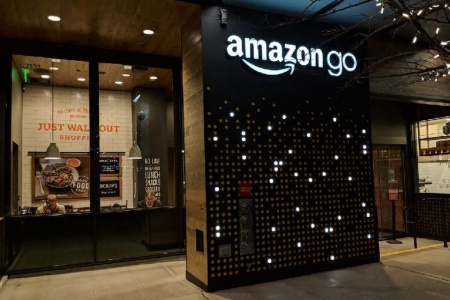 More Americans these days are shopping Amazon for groceries: While the e-commerce giant accounts for less than 1% of total U.S. grocery sales, a recent survey from financial services firm Cowen & Co. found that 18% more people shopped for groceries and other consumable goods on Amazon in the first quarter of 2016 than did in the year-ago period.

Amazon is not leaving the category to its online operations, though, with plans to open 20 physical grocery stores in major U.S. cities over the next two years, and with ambitions to open as many as 2,000 over the next decade, according to internal company documents previously obtained by Business Insider. The company also has plans for convenience stores and grocery pickup locations, dubbed “Project X,” though it’s unclear whether Amazon Go is part and parcel of those plans or something else entirely. The Wall Street Journal Monday also reported that the e-commerce giant has plans for “multi-format” stores, akin to German grocers operating here like Aldi and Lidl, which are smaller-than-average stores that only offer private-label goods — bare-bones offerings at bare-bones prices. Unlike the European chains, though, the Amazon version, which might appear sometime next year, would offer delivery and click-and-collect services, according to the Journal.

Amazon has also launched its own private-label food assortment, and earlier this year, the company eliminated the $299 annual price of its Amazon Fresh grocery membership in favor of an added monthly fee for members of its $99 Prime membership, which includes free two-day shipping on many items, as well as entertainment streaming services and other perks. Fresh is now $15 per month (and doesn’t include Prime); non-Fresh members can access the service for $10 per order, the latest in a series of pricing changes since the effort launched.

It’s not a surprise that Amazon would need to experiment with its mix of fees and services as it scales a program that is so new to it as a retailer. Its challenges likely include getting a handle on costs — figuring out what they entail, how they change (or don’t) with scale and how to mitigate them without turning off customers.

Wal-Mart Stores, just one of Amazon’s rivals in grocery, has said that the value of its app is seamless checkout, but the Amazon Go store unveiled Monday opens a new chapter in retail that effectively throws out the definition of “convenience” in “convenience store” as we know it.

Retail futurist Doug Stephens, author of the forthcoming book “Reengineering Retail: The Future of Selling in a Post-digital World,” told Retail Dive Monday that he already envisioned that even self-checkout terminals will ultimately give way to “no checkout in the future…[Amazon Go] now supports the position.”

Furthermore, Cowen & Co.’s John Blackledge in a note Monday cited by Barrons said the Go store technology puts Amazon in a position to “feast” on the “massive U.S. food and beverage industry,” all the more so considering that millennials have yet to reach their peak buying power.

How to Attract the Luxury Consumer in 2020