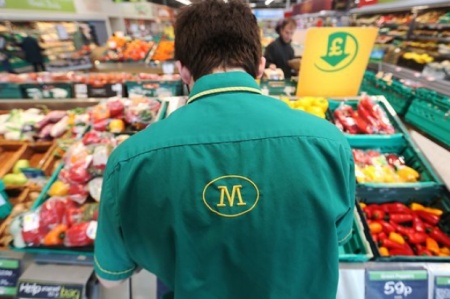 Amazon is to start selling food from one of Britain’s biggest supermarkets in a groundbreaking tie-up that highlights the dramatic shifts in grocery shopping.

Fresh, chilled and frozen food made by Morrisons will be available on Amazon within the next few months on its Prime Now and Pantry services.

The tie-up between Amazon and Morrisons, which was founded in 1899, underlines the growing prominence of the US company in the retail industry.

It was announced on the day that the British Retail Consortium, the industry trade body, warned that almost 1m retail jobs could disappear over the next decade because of technological developments and the growing cost of running bricks-and-mortar shops.

Online accounted for 6.7% of grocery sales last year. However, the category grew by 9% year-on-year at a time when the wider market is in decline.

Amazon already offers its own grocery service called Amazon Fresh in a handful of US cities. However, in the UK it has been expanding its range of grocery products through Prime Now and Pantry.Its collection of fresh and frozen food has been negligible until now, but the deal with Morrisons paves the way for Amazon to ramp up its expansion in the grocery market.

Prime Now delivers products to customers within one hour for £6.99. It is available in London, Birmingham, Newcastle, Manchester and Liverpool but is expanding fast. Amazon Pantry is a nationwide service that allows shoppers to build up a box of grocery items for delivery the next day.

Retail analysts said Amazon’s expansion into fresh food could lead to a further shakeup of grocery shopping, with the “big four” of Tesco, Asda, Sainsbury’s and Morrisons already battling against falling sales. John Ibbotson at consultancy Retail Vision said: “Tesco could soon be about to find out what it’s like to be David rather than Goliath.“The only winner is the consumer. The big four are fighting back with click-and-collect, but who will want that if Amazon delivers to your door in one hour?

“This deal is the final link in the chain for Amazon to launch Amazon Pantry and take on the big four by delivering a full grocery offer including fresh and frozen food.”

The US online retailer will offer customers hundreds of Morrisons products through its existing services, including fresh, frozen and chilled foods. The full list of products has not been released but Amazon says it will include orange juice, chocolate, spaghetti and soup.

Amazon will be able to choose which Morrisons products it sells and their price because the agreement is a standard wholesale deal between a retailer, Amazon, and a supplier, Morrisons. However, it is unlikely that Amazon will significantly undercut Morrisons on the price of its own products because the supermarket chain could simply pull out of the deal.

As well as being the UK’s fourth-largest supermarket chain, Morrisons is one of the country’s biggest food manufacturers, producing its own-brand food at farms and factories. However, the company’s manufacturing facilities are thought to have spare capacity after it closed shops and pulled out of convenience stores, paving the way for the Amazon deal.

David Potts, chief executive of Morrisons, said: “Today’s agreement is built on Morrisons unique strengths as a food-maker. The combination of our fresh food expertise with Amazon’s online and logistics capabilities is compelling.”

Shares in Morrisons rose almost 6% after the deal was revealed. Analysts said that Amazon would help Morrisons to increase its market share in major cities.

Bruno Monteyne, analyst at investment bank Bernstein, said: “Morrisons may feel that Amazon isn’t really a threat for its smaller stores in the north of England. On the contrary on our recent store visit, we saw a nice new shiny Amazon locker unit for picking up Amazon parcels. This would be a convenient divide-and-conquer outcome where Amazon and Morrisons specialise where they are best and support each other mutually.”However, he warned that Morrisons may have handed Amazon a vital foothold into the UK grocery market. Monteyne added: “Letting the Barbarians in’ is the other potential long term outcome. Having a credible fresh food supply in the UK will allow Amazon to build scale and expertise and really make an impact on the UK food retail market.”

Shares in Ocado slumped by 8% in reaction to the deal due to fears that the arrival of Amazon could hurt Britain’s biggest online-only food retailer.

Morrisons will continue to offer its own online grocery service to customers on Morrisons.com, which is runs in partnership with Ocado. However, the company said it has reached an “amended agreement” with Ocado about the future of Morrisons.com.

The two retailers will build a new warehouse together in Erith, south London. Ocado has also developed a system that will allow Morrisons to pick Morrisons.com orders from the products in its supermarkets. This will allow the online Morrisons service to reach parts of the country where it is not presently available, such as northern England and Scotland.

Ocado insisted the amended agreement, which is yet to be signed, was a “win-win” for both companies. The 25-year deal between Ocado and Morrisons, signed in 2013, had been criticised as being too expensive for Morrisons. The changes are thought to mean that the supermarket retailer will pay lower fees to Ocado at the new warehouse than it does in their existing site in Dordon, Warwickshire.

Duncan Tatton-Brown, Ocado’s finance director, denied Morrisons had undermined the company by choosing to work with Amazon as well.“I think it is encouraging. Anything that helps to grow online grocery shopping is a good thing,” he said. “We look forward to the future with optimism.”