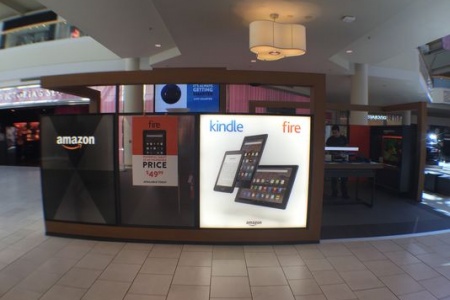 Amazon plans to open dozens of new pop-up stores in U.S. shopping malls over the next year to showcase its range of connected devices. Job listings in markets including Miami and West Hartford, CT seek to fill a number of positions for “Amazon device pop-up stores,” noting the concept has “emerged from the test phase with a goal to expand and grow.”

Amazon has run temporary pop-ups and kiosks in California malls since 2014, aimed at featuring devices include the hands-free Echo speaker as well as the Fire TV, Fire tablets, Kindles and the now-defunct Fire phone. The pop-ups are separate from the full brick-and-mortarstores that Amazon opened in Seattle last year and is planning for San Diego, CA and Portland, OR.

As of August, Amazon is running 16 pop-up stores across the U.S., up from six at the end of last year. That number could exceed 30 this year, and in all, Amazon may end up running 100 by next year. When Amazon opened its first physical bookstore in Seattle last year, retail futurist Doug Stephens told Retail Dive that nobody should be too surprised about Amazon’s move.

“Everyone was shocked and amazed at Amazon’s bookstore, but the bookstore is a Trojan horse, to get devices into consumers’ hands,” Stephens said. “Everything Amazon does is aimed at that — getting their consumer into their ecosystem.”

Experts say that these physical locations also help Amazon provide “touch and feel” opportunities for its devices, and a way to collect even more consumer data. Having brick-and-mortar stores additionally can help Amazon process returns and rein in some of its mounting shipping costs if placed in strategic locations.

Amazon’s brick-and-mortar vision also encompasses the mysterious “Project X,” which appears to be a series of brick-and-mortar drive-up grocery stores. Permit filingsdemonstrate plans to renovate a former restaurant in Seattle’s Ballard neighborhood into a 9,759-square-foot store designed to serve as a pick-up space for groceries ordered online.