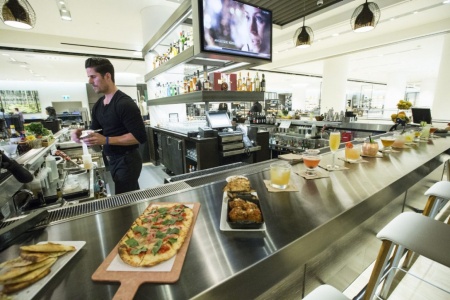 It will have a casual cocktail lounge, a men’s clubhouse, a playhouse for children, an espresso bar, a full-service licensed restaurant and Nordstrom will also sell clothes and shoes and accessories when it opens inside its Toronto Eaton Centre location.

Launching this store at a time of turmoil in the apparel industry, the Seattle-based retailer is betting that a suite of lavish services — including the restaurant and bars; a 24-hour emergency shopping service; personal stylists; and a small army of cosmetics experts — will be a hit with shoppers who are proving increasingly distracted and harder to persuade when it comes to spending money on the things they wear and carry.

The new store has been carefully laid out across 220,000 square feet on three floors at the north end of Eaton Centre, in part of a space once moored by the failed Eaton department store chain and vacated by a struggling and grateful Sears Canada in exchange for cash from mall operator Cadillac Fairview.

The space has been transformed into a fresh, bright, slate, with natural light from windows overlooking Yonge Street. It has been carefully curated with goods ranging from Nordstrom’s own private-label clothing and accessories to frothy designer creations with equally frothy price tags.

It will be the fourth Nordstrom store to open in Canada and the second largest, after the Vancouver location. A fifth is set to open at Yorkdale on Oct. 21, and a sixth is set for Sherway Gardens in the fall of 2017. Five Nordstrom Rack locations have also been announced.

“We’re happy with the way they’re going. They’re doing well, but by no means do we think we have it all figured out,” said Todd Buntin, Nordstrom CF Eaton Centre store manager, during a media tour of the TEC store.

Whether Nordstrom will ultimately succeed with its model in Canada requires a longer time frame than the two years since the first store opened in Calgary, and will depend on a number of economic factors, but adding restaurants and bars to the mix is being met positively by some analysts.

“There is a tight correlation between the number of minutes or hours a consumer spends in a store and how much they buy and how loyal they are to a store,” said Merril Mascarenhas, managing partner at Arcus Consulting Group.

He cites Ikea as an example of a retailer that has successfully used the restaurant concept to build traffic, sales and loyalty — many shoppers breakfast at Ikea and then shop, or shop and pause for a lunch of Swedish meatballs.

Perhaps ironically, offering shoppers a place where they can meet and eat and shop is a return to old “Main Street” culture, said Mascarenhas.

“Most interactions have become too transactional, whether they are in the workplace or online. Emotion has been stripped out of a lot of those transactions.”

Creating a place where people can meet and interact with others brings the emotive reasons for shopping back into play.

Amazon poised to launch 100 pop-ups in US malls