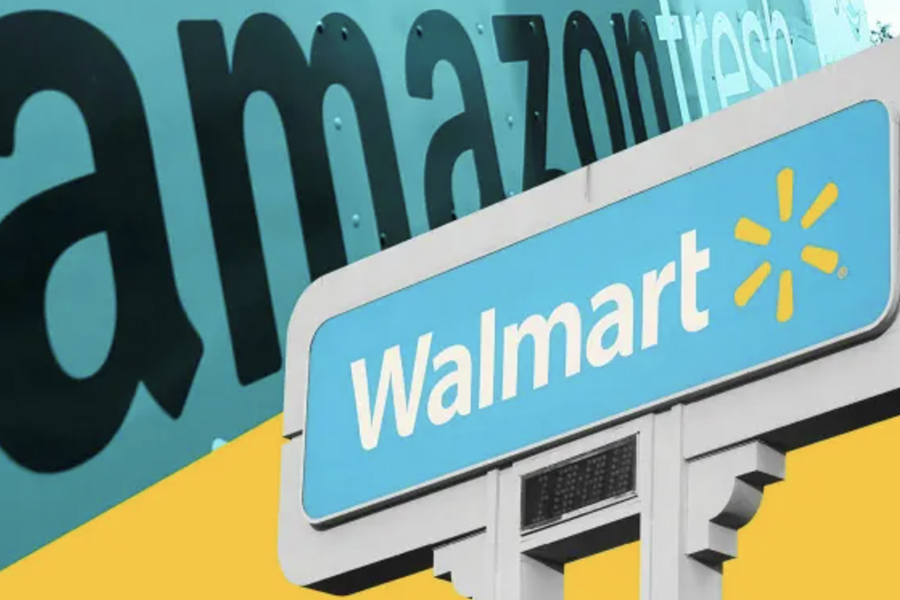 “What is the place you think of when you think:

‘I want to buy a soccer ball, I want a dress, I want ground beef’?” The question is posed by Janey Whiteside, Walmart’s chief customer officer. “The retailer that wins that top-of-mind [battle] becomes the go-to destination,” she says.

Obviously, she would like the answer to be Walmart, both for its bricks and mortar stores and its burgeoning ecommerce business, but it has been in a two-decade battle with Amazon that is intensifying as the rivals chip away at one another’s core strengths in online retail and store chains.

Despite the competition, both are still growing, and it is the little guys we should be fearing for in this contest. Sales have ballooned during the pandemic, making them the world’s two largest public companies in any sector by revenues. Walmart’s remain bigger by a comfortable margin, with net sales last year of $555bn compared with Amazon’s $386bn. In the first part of an FT series on the future of retail, Alistair Gray and Dave Lee report on Amazon’s renewed assault on groceries and the supermarket business with Amazon Fresh, which has now grown to at least a dozen stores, with more on the way.

There is convergence on ordering groceries online and having them picked by staff in stores, a process that Amazon has been struggling to streamline, reconfiguring its Whole Foods stores during the pandemic to be more like Fresh’s ecommerce operations. For now, Amazon’s stores “are too few and too scattered” to have a transformative impact, said Bill Bishop of retail analysts Brick Meets Click. “It would — and potentially will — be a different story if Amazon uses the Fresh stores and Whole Foods to begin to saturate a particular market area.”

The Internet of (Five) Things

After falling 2.6 per cent on Monday on inflation fears, the tech-heavy Nasdaq had pared back Tuesday morning losses of about 2 per cent to be down 0.6 per cent at lunchtime in New York. Still, Cathie Wood’s $21bn Ark Innovation fund of tech stocks has fallen to its lowest level since November, with some of its biggest holdings including Tesla down a tenth or more already this month. Ark has now lost over one-third of its value since a February peak.

Billionaires Peter Thiel, Louis Bacon and Alan Howard are among the backers of a new cryptocurrency asset exchange called Bullish Global, which has been capitalised with more than $10bn in cash and digital assets ahead of its launch later this year. Jemima Kelly comments that the “joke” cryptocurrency dogecoin can help us to stop taking the crypto project quite so seriously.

The White House has opened a debate over the merits of companies making ransom payments to cyber attackers after a group of hackers shut down a US oil pipeline over the weekend. For more than two years before Colonial was hit, US officials had repeatedly warned major pipelines that they were increasingly vulnerable to hackers as they moved their operations online.

A German regulator has banned Facebook from processing any data from WhatsApp users, arguing that the messaging app’s controversial new terms of service are illegal under European privacy law. The Hamburg Commissioner for Data Protection and Freedom of Information issued an emergency order prohibiting Facebook’s European operations from “processing personal data from WhatsApp for its own purposes” for three months.

5. Vice adjusts model ahead of IPO

Vice Media, the youth-focused news and entertainment group, has launched a free-to-watch online television channel to capitalise on the boom in streaming as it prepares for a stock market listing. Vice has been revisiting its business model while aiming to keep its reputation for edgy content and sway with millennials.

Yoto’s £80 speakers, which can be operated by young children, have been a pandemic hit with parents, writes Nic Fildes. They have only a very basic display and work by inserting cards loaded with stories, music, educational content or radio programmes into a slot on the box. Recent investor Richard Reed said that he saw a Yoto Player on Instagram and bought one as an alternative to a television screen to entertain his three young children during lockdown. He said the speaker had quickly become “like a pet” as his kids would carry it around with them to listen to stories, music and recordings of their grandmother’s voice. “It’s not a toy,” he said of the device. “We see it having limitless upside. It is a portal into audio entertainment and education.”

People are shopping at department stores again. But don't call it a comeback