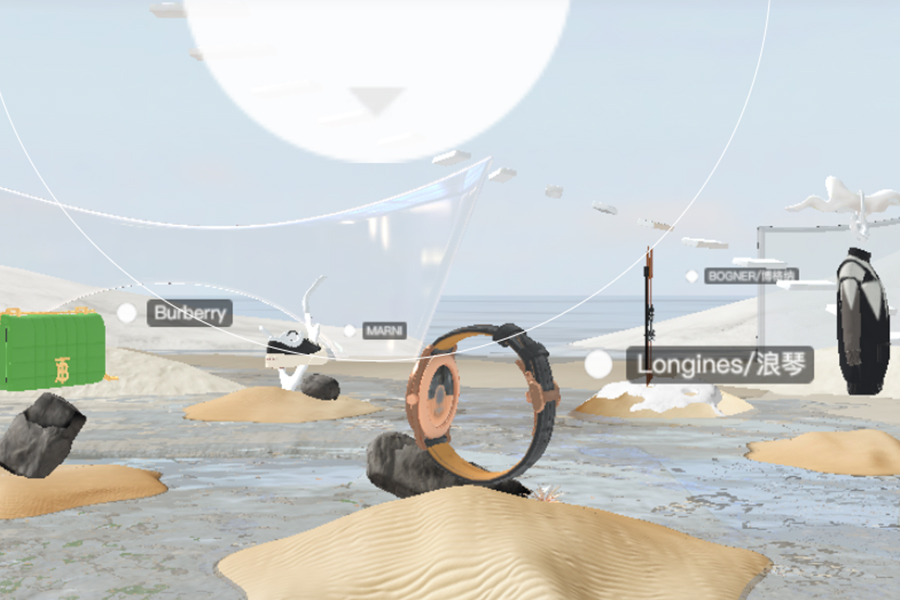 Also this month in Shanghai, luxury executives attended an awards ceremony and explored an exhibition on extended reality.

“Before metaverse became a buzzword, we had already transformed this buzzword into a commercial reality,” says Janet Wang, Head of Alibaba’s luxury division.

Luxury brands, such as Richemont, Kering, LVMH and OTB, gathered last week at a gala in Shanghai to mark the five-year anniversary of Tmall Luxury Pavilion.

This included a temporary exhibition created by DAMO Academy’s XR Lab and Tmall Luxury Pavilion where people could immerse themselves in a mock-up of a luxury boutique of the future.

Luxury executives tried on AR glasses, held a digital luxury bag and placed it in a gift box.

They could also play with brands’ mascots and hold a tiny Burberry deer in the palm of their hand. When they clicked on a product, a window appeared in front of them with product listing details.

The virtual content was superimposed on the hall walls in a renovated industrial warehouse in Shanghai.

Next up will be an AR fashion show in collaboration with Vogue China and various artists.

Brand’s mascots will strut their stuff down virtual runways on 22nd September such as Bogner’s Snow Monster. Viewers on the Tmall Luxury Pavilion’s platform can interact with the mascots, for instance, by taking selfies with them.

Also this month, followers of fashion within Alibaba’s ecosystem can claim a Meta Pass, free entry into the e-commerce giant’s metaverse. The pass gives the holder rights to luxury services such as priority purchase of products and admission to brands’ offline activities.

Part of this package will be digital warrants certified on the blockchain.

“The digital world can provide consumers with the same, or even better, shopping experiences and luxury-brand identities than in the real world,” says Wang.