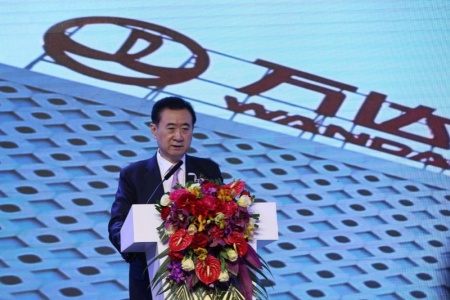 This is Wanda Film’s first major sale of shares to external investors after listing on the Shenzhen bourse in 2015 and comes as the group’s billionaire founder Wang is selling off assets from real estate to hotels to help pay down debt. The fundraising also comes in the midst of an asset restructuring at Wanda Film, whose shares have been suspended from trading since July.

Investing in Wanda could help Alibaba founder Jack Ma play a larger role in China’s film industry, forecast to become the world’s largest box-office by 2020. In 2016, Alibaba Pictures Group Ltd. bought a stake in Amblin Partners, the outfit backed by Steven Spielberg to work together on production, marketing and distribution both globally and in China. Billionaire Ma is competing with Tencent Holdings Ltd.’s Pony Ma Huateng, as both invest in movie and TV production.

This is the second time in a week that a Chinese tech giant has invested in Wang’s Wanda Group, which has been under Chinese government scrutiny for “irrational” outbound investments. Last week, a consortium led by Tencent agreed to buy a 14 percent stake in Dalian Wanda Commercial Management, formerly known as Dalian Wanda Commercial Properties Co., for $5.4 billion, easing pressure on the unit to complete a listing by September.

In addition to the investments, Wanda Film will cooperate with Alibaba and Cultural Investment on areas including film distribution, marketing, financing as well as pre-screening advertising and online ticketing, according to the filing.