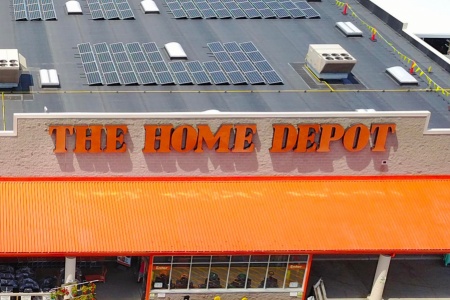 Tesla Inc. is planning a major expansion of its solar division at Home Depot Inc., embarking on a critical test of the mainstream appeal of its renewable-energy products.

The tech pioneer, best known for its electric cars, is beginning to roll out Tesla-branded selling spaces at 800 of the retailer’s locations, the company confirmed to Bloomberg News. The areas, which will be outfitted during the first half of this year, are staffed by Tesla employees and can demonstrate its solar panels and Powerwall battery.

Lowe’s — the second-largest U.S. home-improvement chain, after Home Depot — has also been in discussions with Tesla about selling its solar products, said people familiar with the situation. At some point, Home Depot may also offer Tesla’s much-anticipated solar roof, said one of the people, who asked not to be identified because the deliberations are private. Tesla, Lowe’s and Home Depot declined to comment on those plans.

Home Depot had a previous relationship with SolarCity Corp., the company Tesla acquired in 2016 and has since retired as a brand — with salespeople in some stores trying to generate customer leads. But the products themselves weren’t on-site. Now, they will be highlighted in high-profile displays, which are 12 feet tall and 7 feet wide. Some locations will be fitted with visual demonstrations that show how the products work.

Expanding Tesla’s presence at Home Depot — one of the largest retailers in the world, with more than 2,200 stores — will be a good measure of its aspirations for solar. Several companies have tried, and failed, to make similar products financially viable. Plus, the U.S. solar market has recently contracted.

For Home Depot, Tesla’s solar panels and Powerwall battery are an opportunity to get a bigger presence from a popular brand. It’s already been a robust period for the home-improvement industry. Rising home values have spurred Americans to upgrade their properties, helping the chain avoid the malaise that has engulfed much of the broader retail industry.

Starbucks’ Rewards scheme forms the basis of a digital currency