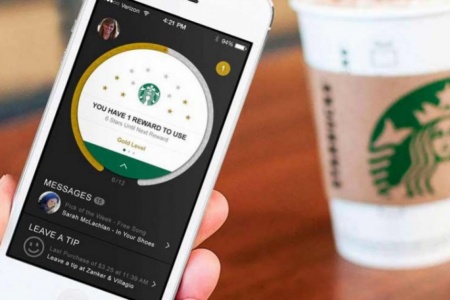 The growing number of mobile transactions Starbucks is processing has led it to look at how blockchain technology could soon “form the basis of a digital currency with real consumer use” and start planning for a future where it is the brand that “legitimatises” its use.

Sitting at the heart of Starbucks’ future-proofing plan is its Rewards scheme.

Launched in 2016, Starbucks says the mobile app attracted some 1.4 million new members to its already 14 million strong user based last quarter. This 11% surge has underpinned a 30% growth in the number of mobile transactions the coffee-chain is seeing in stores. Furthermore, its members are spending more per order and giving “an entirely new direct marketing capability to a vast customer audience”.

Such is the demand, it’s now thinking about turning some US shops “cashless” while this coming quarter it will launch its first co-branded credit-card with financial giants Chase and Visa.

But this is just the start of Starbucks’ entry into the fintech space as awareness around alternative currencies continues to move into the wider public’s consciousness and, in-turn, its plans for the future.

Bosses at the coffee-chain dubbed it an “arms race” as companies around the world battle to not only understand the tech underpinning cryotocurrencies, but how they will impact the way people buy goods in the future.

Starbucks stressed that, unlike some brands, it isn’t planning to launch its own version of Bitcoin. In fact, chairman Howard Shultz fundamentally doesn’t believe Bitcoin “is going to be a currency today or in the future”.

But what Shultz is interested in is the blockchain technology it’s based on, “and the possibility of what could happen not in the near-term, but in a few years, with a consumer application in which there is trust and legitimacy with regard to a digital currency”.

Blockchain essentially acts as a digital ledger, which continuously updates a list of transactions. As The Drum’s columnist Samuel Scott describes it: “In basic terms, Blockchain is like a gigantic Google spreadsheet in the cloud. Whenever someone in the network makes a transaction and ‘edits’ the ledger, everyone else verifies the change and sees the updated ledger. No other party – such as a government, bank, or financial institution – is needed.”

For Starbucks, this could deliver benefit when it comes to understanding consumer behaviour, with Shultz comparing the potential of the technology to that of the “seismic change” that e-commerce brought. And so, its early investments into digital payments and experiments around the Starbucks Rewards scheme have put the brand in a “unique” position to take advantage of blockchain further down the line.

“As we think about the future of our company and the future of consumer behaviour, there is going to be one or a few legitimate trusted digital currencies from the blockchain technology,” said Shultz. “And that legitimacy and trust in terms of its consumer application will have to be legitimatised by a brand and a brick and mortar environment, where the consumer has trust and confidence in the company that is providing the transaction

“Well, if that’s the case, if you believe that that proposition is possible, how many companies have the national or global footprint as well as the digital mobile payment trust and confidence integrated into its existing business? And if you take it a step further, and you believe this is coming, given the fact that there are hundreds of millions of dollars domestically and globally being invested in this technology, in which there is an arms race as to who is going to win.”

It’s not trying to go it along. Partnerships forged with companies like Chase, Tencent, Alibaba are helping it to monitor and explore this landscape.

Lara Ferris, a strategist at digital agency Possible, dubbed it a wise move from Starbucks to declare itself open to accepting payments from another – future – trusted cryptocurrency. “They’re showing they recognise that, crypto hype aside, we’re soon going to be dealing with cashless payments of many different shapes and sizes.”

However, by just focusing on the potential blockchain offers around digital payments the company could be missing out the bigger opportunity that blockchain technologies can enable.

Jon Davie, chief client officer of digital agency Zone – recently acquired by IT giant Cognizant – pointed to the recent announcement that Maersk and IBM are exploring blockchain to add transparency and trust to the global supply chain is a great example of alternative use cases.

“What if Starbucks could verify the provenance of every cup of coffee to a specific farmer, reinforcing their commitment to fair trade and sustainable development?,” he said.

“We’re currently working with a retailer to help them prove the veracity of their products in a market plagued by fakes and forgeries. The opportunities around distributed ledgers and smart contracts go way beyond crypto-currencies, and we’re right at the beginning of exploring how companies and customers will respond.”