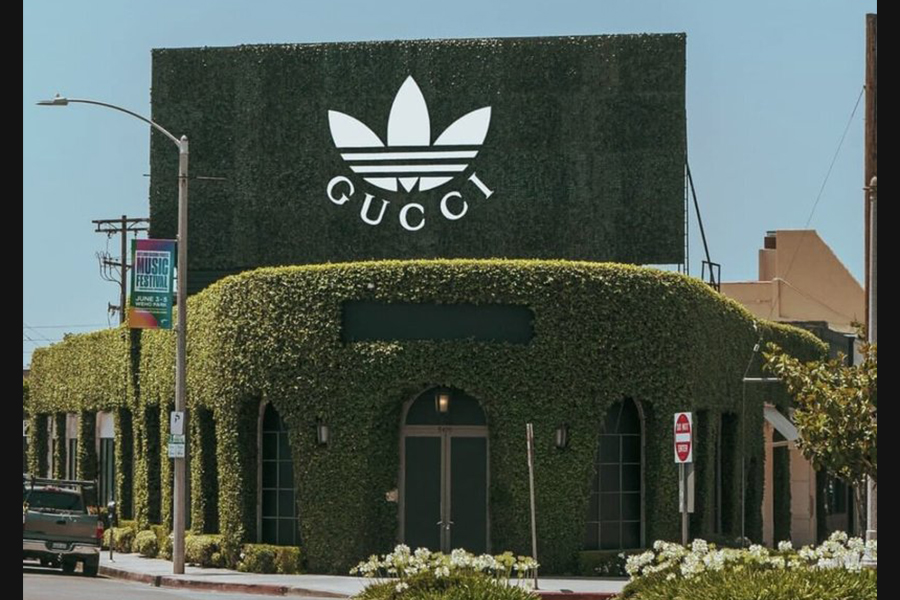 It is on a famous place in Los Angeles, at 8400 Melrose avenue, on the site of the former Marc Jacobs Melrose store and its famous entirely vegetated facade, that the first pop-up store between Adidas and Gucci is opening.

A pop-up lined with geometric patterns from the collection, and doubled by another in the South Coast Plaza, a large mall east of Los Angeles where the major luxury brands are concentrated today.

The collection designed by Alessandro Michele, and unveiled at the ‘Exquisite’ Gucci fall 2022 show, combines tailored style with sportswear style, borrows its codes from the 80s and crosses the two brand universes, like the three Adidas stripes reviewed in the light of Gucci’s emblematic red and green colors and which appear on long or short jumpsuits.

Similarly, the famous Adidas trefoil logo is repeated endlessly, on track jackets, tops, shorts and luggage, and blends with the Gucci monogram on tracksuit sets, short or pleated skirts. Monochrome red and blue tennis skirts are stamped with the Adidas logo.

On the accessories side, the first visitors will be able to opt for the Gucci Horsebit 1955 shoulder bag and tote adorned with the clover pattern, the camera bag marked with the Gucci logo upside down. The Adidas Gazelle sneakers have been revised and corrected by combining logos and GG canvas print and the loafers are adorned with the famous Adidas three stripes. The selection finally includes golf bags, umbrellas and baseball caps.

A few hours after the opening of the pop-ups, many pieces were already sold out.

Retailers have an inventory problem as lockdown lifestyle fades