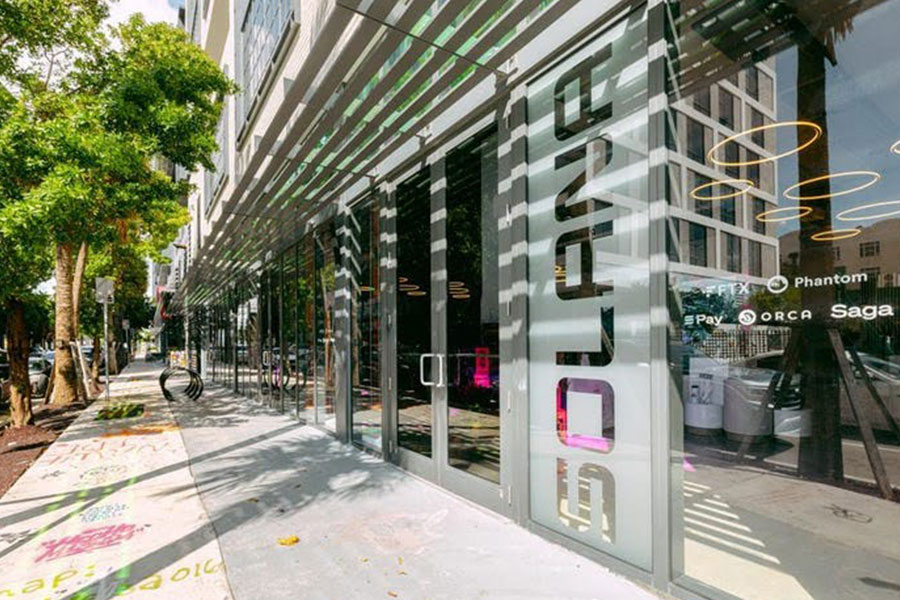 Yesterday, a new retail experience launched in the heart of Miami’s Wynwood district. Surrounded by digital brands like Warby Parker and Marine Layer, boutique coffee shops, and some of the city’s best restaurants and nightclubs sits a 4,500-square-foot space called The Solana Embassy. It aims to attract similar customers to its neighbors, with Supreme-like exclusive merchandise drops, a cozy FTX co-working lounge, a Degen Ape Café NFT coffee shop, and a sound and light system that converts the space into a trendy Miami nightclub. However, its primary purpose is to lure the crypto inquirer, the Web3 enthusiast, and the purely inquisitive passerby. In essence, it unites the mysterious world of crypto with the familiar realm of physical retail.

The Solana Embassy is the second location to open by a company called Solana Spaces, which, counter to the belief of many, has no direct association with the cryptocurrency Solana. It was founded earlier this year by Vibhu Norby in collaboration with The Solana Foundation, which funded and incubated the store. Norby is an entrepreneur known for co-founding B8ta, one of the first retail-as-a-service stores that charged a monthly fee to brands to showcase products in its store and receive data. Before the pandemic, B8ta had about 20 stores in the US, several abroad, and extensive funding from prominent investors like Macy’s. However, because of the pandemic’s effects on business, the company closed its doors earlier this year. Although Solana Spaces is new, it’s a concept Norby has been thinking about for some time and plans to expand domestically and internationally.

Crypto Is Uniquely Prepared To Take Advantage of Experiential Retail

The Solana Spaces locations act like B8ta in educating potential consumers and users on what is unknown to those not active in the crypto community. It has a similar purpose to the stores of most digitally native brands. For example, a study from 2019 called Customer Supercharging in Experience-Centric Channels found that these retail spaces “supercharge” customers, increasing spending per order by up to 60% and increasing the frequency of purchases. In another study looking at Warby Parker, the same professors found that about 80% of store visitors were new, and opening a store increased sales in the market by 7.4%. Although these examples refer to digital brands, they’re indicative of the power of the experiential concept.