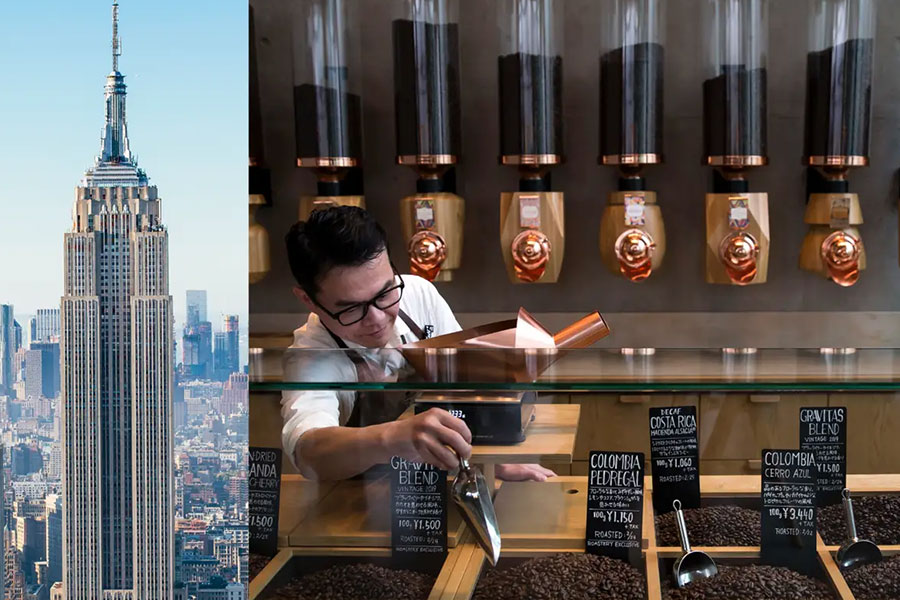 Starbucks is opening a three-floor, 23,000-square-foot store in the Empire State Building.

The store, set to open on November 16, will be in the Starbucks Reserve format. It is more than 10 times the size of the coffee chain’s regular stores.

Starbucks says that the new store will sell exclusive new hot drinks, coffee-inspired cocktails, and food, as well as its staples that feature on its regular menu across the country. It will also sell drinks from the Starbucks Reserve menu, such as the Hazelnut Bianco Latte, Whiskey Barrel Aged Cold Brew, and Nitro Almond milk Mocha.

The store will also offer multiple brewing methods, “keeping the theatre of coffee at the center of the Starbucks Reserve experience.”

Starbucks says it will be the only location selling drinks made with Cold Pressed Espresso, a brewing technology patented by the coffee giant “that uses cold water and gentle, upward pressure to unlock a softer, sweeter espresso shot, similar to a slow-steeped cold brew.” Starbucks says the espresso “tastes exceptionally smooth, sweet, and full-bodied.”

The store will host small group classes where people can learn to make coffee, beverages, and cocktails, led by Starbucks baristas and mixologists. It will also offer tasting flights and food pairings, including a flight featuring new beverages made with Cold Pressed Espresso such as the Iced Apple Americano and Sparkling Pistachio Cream Soda.

Like the other Starbucks Reserve locations, the store will offer food produced by Princi. Meals will start with a complimentary coffee tasting, Starbucks says.

Starbucks has six flagship-style Reserve Roastery stores, which sell cocktails, Princi food, and drinks made with upmarket coffee. These are located in Seattle, Chicago, New York, Shanghai, Milan, and Tokyo. The New York Reserve Roastery is located in the city’s Meatpacking district.

In addition, Starbucks has several dedicated Reserve stores and bars – slightly less extravagant than the Reserve Roasteries – and also sells it Reserve coffee at more than 1,500 of its stores globally.

Starbucks’ Greenwich Lane Reserve Bar store in New York sells its cheapest lattes and cappuccinos for $5, while its Cold Brew Malt goes for $11 and its Nitro Almondmilk Mocha for $8. Cocktails are priced at between $11 and $13 and wine at between $10 and $15 a glass. Pizza, cannoli, meat and cheese boards, and ice-cream floats are also on the menu.

The nearby New York Reserve Roastery, just a five-minute walk away, has a similar menu but at higher prices.

The menu of the Empire State Building store has yet to be released.