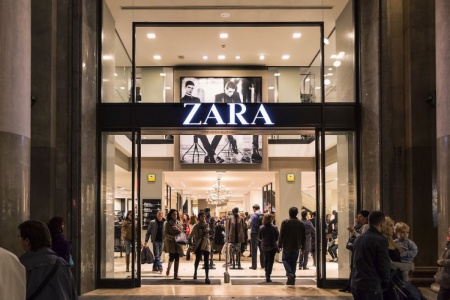 Deep inside a sprawling glass-and-cement edifice the size of an airplane hangar in the Spanish town of Arteixo, 10 designers swarm around a model dressed in cropped gray trousers and a double-breasted navy blazer. Sweaters, shirts, and suits are spread out on the white-tile floor, while seamstresses in white labcoats stitch prototypes nearby.

This international tribe of thirtysomethings is a big part of the success of Zara, the brand that over the past four decades has grown from a single store in the Spanish city of La Coruña into the biggest fashion retailer on earth. As the team debates whether the collection is too plain or too daring, it becomes clear no one is in charge. Juan Mendivil, a menswear buyer, fields opinions, but the decision doesn’t rest with him, and everyone has a say. They finally agree on solid colors and traditional cuts for Europe and bold patterns for China, where sales data indicate such styles are popular.

Zara’s culture isn’t as easily copied as the latest fashion trends, and that partly explains why Inditex, its parent company, is a breakaway success while most global clothing retailers are struggling. American Apparel filed for bankruptcy in November for a second time, sales have fallen at Gap stores, and profit is down at H&M. In contrast, Inditex powered ahead with an 11 percent rise in revenue in the first half of the year. “There isn’t a magic formula,” says Pablo Isla, Inditex’s chairman and chief executive officer. “There are no stars. We are able to react to data during the season, but in the end, what we offer our customers is fashion, and there’s a human element to that.”

Controlled by Spanish billionaire Amancio Ortega, who this year briefly surpassed Bill Gates to become the world’s richest man before falling back to second place, Inditex posted €20.9 billion ($22.2 billion) in sales last year, from 7,100 stores in 93 countries. Other Inditex brands such as Bershka, Massimo Dutti, and Pull & Bear are growing, but Zara still accounts for two-thirds of sales. Ortega hired Isla, a bespectacled former Banco Popular Español executive, as CEO in 2005, but he hasn’t retired. At 80, he still comes to work most days, often sitting in the Zara women’s department, where his 32-year-old daughter Marta works on the commercial team after a stint at Bershka. While he can sometimes be seen walking his dog Pepe in the town square of nearby La Coruña, Ortega remains one of the world’s most secretive billionaires, leaving Isla to oversee Inditex.

One concern for Zara is managing its growth, says Andy Hughes, a retail analyst at UBS. With Inditex’s sales almost doubling since 2009, Isla is adding stores at a slower pace, concentrating instead on a smaller number of flagship locations and its online business. Another concern is that rivals might figure out how to match Zara’s quick turnarounds.

With production nearby, Inditex can quickly switch gears if weather or fashion trends change, getting designs into stores in as little as two or three weeks, while rivals’ orders slowly make their way across the ocean on container ships.

Just as important is the way Inditex “pulls” ideas from consumers, Isla says, rather than designing collections months in advance and “pushing” goods on shoppers with ads. While analysts say H&M spends as much as 4 percent of sales on advertising, Inditex has virtually no ad budget apart from social media marketing. Since 2010, the data on what customers want has been augmented with information from online sales.

This means the designers are constantly tinkering. When military jackets turned out to be big sellers this autumn, the commercial team asked the designers to keep tweaking them with new fabrics and cuts.

About two-thirds of Inditex’s products are generated under short lead times, vs. 20 percent for most retailers, she says. Small production runs mean Zara can test designs in various markets without building up unwanted stock that it might need to unload at a deep discount.

McDonald’s to roll out mobile ordering, table service in US