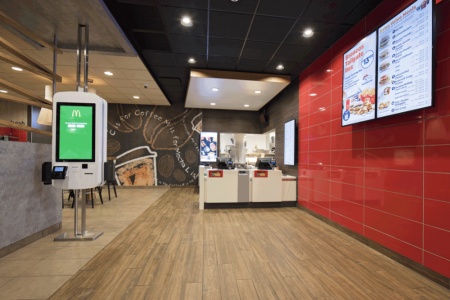 McDonald’s Corp. will debut mobile ordering and table service in the U.S. next year as part of a plan to make its restaurants more technologically savvy, the company said Thursday.

The chain plans to bring its “Experience of the Future” concept, which features table service and kiosk ordering, to several new markets in 2017 as part of an effort to transform restaurants and improve speed and accuracy.

McDonald’s has been testing the concept at 500 locations, mainly in New York, Florida and Southern California. It plans to roll the service out in Seattle, San Francisco, Chicago, Boston and Washington, D.C., next year, according to the company.

McDonald’s plans to introduce mobile ordering in the U.S. in 2017.

Mobile ordering, kiosks and table service would be a monumental change for a brand that has long been known for being slow, methodical and even behind the times when it comes to technology.

But the chain is intent on changing that image. In 2014, McDonald’s announced plans to bolster its digital staff from about 20 employees to as many as 250 workers.

The goal of adding the technology is to improve service and the ordering process in an effort to reduce mistakes and increase efficiency at a brand known for its complexity.

McDonald’s said customer satisfaction scores in France jumped as much as 88 percent after it added kiosks and table service there.

While it takes some time to get used to, McDonald’s said more customers ultimately use the kiosks. Kiosk use grew from 18 percent to 25 percent of orders in the 18 months after they were introduced in France. In Australia, sales rose after the model was introduced there, the company said.

McDonald’s said restaurants would hire and train new hospitality crew members in the coming years to improve the customer experience.

As part of the new restaurant model, McDonald’s said it would offer customers burgers and chicken from its premium Signature Crafted line, which offers diners chicken sandwiches or burgers from three different options: Maple Bacon Dijon, Pico Guacamole or Sweet BBQ Bacon. The line is a toned-down version of its customization program, which was known as Create Your Taste.

McDonald’s faces intense competition for consumers’ restaurant dollars. Competitors Burger King and Wendy’s have been generating sales in recent years. Convenience stores have sapped some budget-conscious consumers. And fast-casual chains like Five Guys, Smashburger and The Habit Burger have been stealing some premium customers.

Under CEO Steve Easterbrook, McDonald’s has been unafraid of making big changes in a bid to win back customers. For instance, the chain successfully debuted All Day Breakfasta year ago.

McDonald’s plans a limited-time offer next year featuring new sizes of its signature Big Mac sandwich, including a smaller Mac Jr. and a larger Grand Mac, with two patties totaling a third of a pound of meat.

The chain is also testing a Big Mac flavored with Sriracha in Ohio this month.

McDonald’s stock had been trading as high as $131 per share earlier this year, before falling to $111 10 days ago. The stock has rallied along with other restaurant stocks since the election, but it remains down 9 percent since hitting that high.

Aston Martin invites consumers along for Art of Living experiences