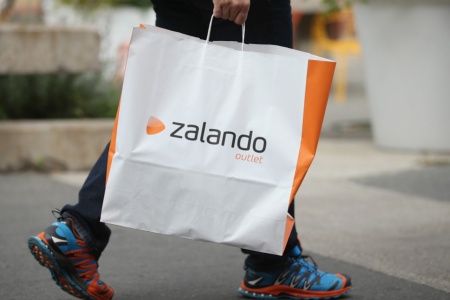 Zalando SE shares rose the most ever in Frankfurt after the German online apparel retailer raised its full-year margin forecast and doused concern over falling profitability.

The adjusted Ebit margin for the year will be 4 percent to 5.5 percent, Zalando said Tuesday, increasing the range from 3 percent to 4.5 percent. The stock gained as much as 20 percent as the company also reported second-quarter earnings that beat estimates.

“This is particularly good news as Zalando’s margin has been declining in the last four quarters,” said Joerg Philipp Frey, an analyst at Warburg Research. “This positive surprise should boost the credibility of its long-term margin target.”

Concern had been growing about Zalando’s dwindling profitability, which has been depressed by increased spending on technology and marketing. Before today, Zalando stock had fallen 27 percent this year, while U.K. competitor Asos Plc had jumped 24 percent. Short-sellers, seeking to profit from a falling share price, held a record 18 percent of Zalando’s free float as of last week, according to Markit Ltd. data.

A second-quarter quarter Ebit margin of 7.5 percent to 9.5 percent reflected increased efficiency in areas such as marketing, where spending rose less in relation to revenue, managing board member Rubin Ritter said in an interview.

Zalando has been investing in warehouse capacity and technology designed to get apparel into shoppers’ hands more quickly, including an initiative in Berlin to ship goods from an Adidas AG store directly to customers who order from the online retailer’s site. It’s also moved past a problem with payment fraud that sapped profit in the year-earlier period.

“Zalando has a number of opportunities to gain further market share in Europe as the online apparel market continues to grow and as Zalando improves the speed and scope of its delivery options,” Claire Huff, an analyst at RBC Capital, said in a note.

The company estimated that second-quarter earnings before interest and taxes and adjusted for some items were in a range of 68 million euros ($75 million) to 88 million euros. Analysts had on average expected 48 million euros.

Sales rose as much as 26 percent to between 909 million euros and 924 million euros, Zalando said, maintaining its full-year forecast for growth at the upper end of a 20 to 25 percent range. The company reports final second-quarter results on Aug. 11.