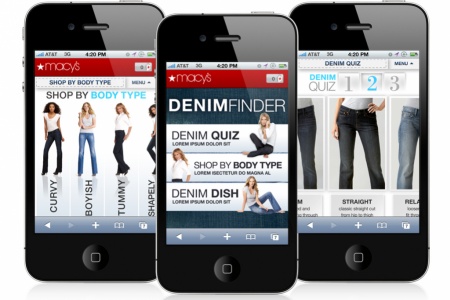 Shoppers are visiting retail websites from mobile devices at a rapid rate, and a new study shows which retailers are capturing the most traffic.

Amazon gets 44 percent of its traffic globally on the mobile web, making it the 13th largest mobile website in the world, according to SimilarWeb.

But Macy’s mobile web traffic is on the rise, with 57 percent of shoppers arriving on the platform via mobile devices, boosting it 168 places to become the 407th biggest site in the world, according to the report.

Mobile use varies globally, with India ranking near the top with 65.8 percent of visits to online retail sites arriving via mobile. U.K. shoppers come in slightly lower with 64.5 percent of retail visits via mobile; 43 percent in Germany; and 36.3 percent in France.

SimilarWeb, a market intelligence company, measures visits to mobile sites, not apps. According to the company, app visits are on the rise and are beginning to offset some made on mobile web. Amazon reported more than 1 million shoppers used the Amazon app for the first time on Prime Day.

Of note for supermarket chains is the viral popularity of cooking websites as consumers search for recipes on mobile devices. Allrecipes.com jumped from 948th place to 583th, with 63 percent of its visits via mobile.