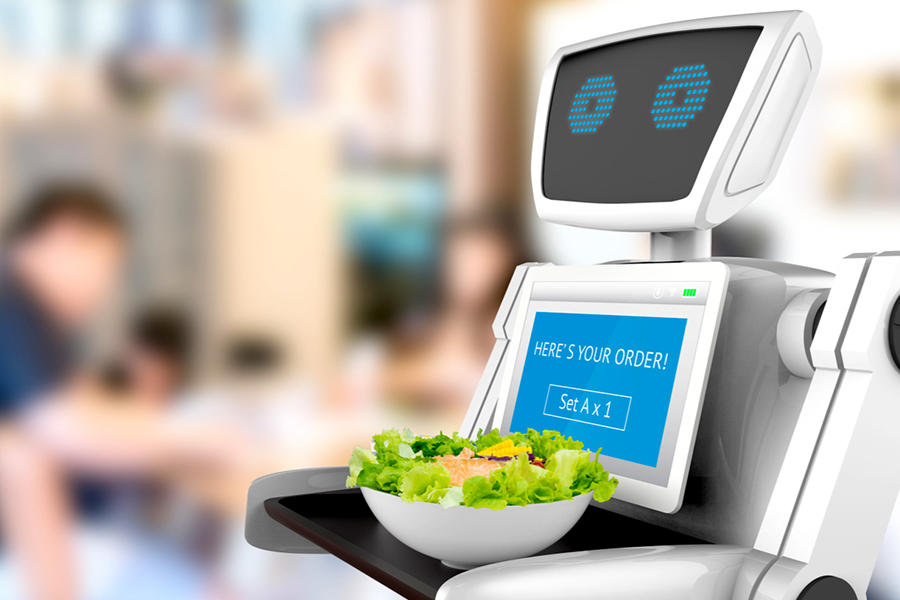 Touchscreens, kiosks, headless commerce, drones and even robots delivering pizza are the present and the future of the retail and restaurant industries as those sectors grapple with continued labor shortages, experts say, and that spells growth for startups focused on automation technologies.

“Wings created its lab to understand the psychology behind this,” said Haitham Al-Beik, founder and CEO at Massachusetts-based robotics startup Wings. “We invent robotics that make sense, don’t take up a huge amount of space in the kitchen and elevate this industry.”

Wings, which has raised $750,000 in venture funding, per Crunchbase data, makes purpose-built robotics, some that come down from the ceiling, and expedite food orders without human assistance. By automating the mundane tasks with robotics, chefs aren’t cutting tomatoes, but spending more time being creative with their food ideas, Al-Beik said.

He sees the future potential of automation in food services as a unique collective of decentralized, self-organized robotic systems. The last time the service industry benefited from true innovation was when McDonald’s reengineered its business 50 years ago and even then there was one way to order and one way to get the food, he said.

“Even prior to the pandemic, no one was really looking at what it takes to serve food, and now you have to offer dine-in, drive-thru, take out and online ordering,” Al-Beik said. “Now people are ordering in millions of ways, but there is still only one way to make the food and get it out. And, restaurants have to increase staff to accommodate that.”

As a result, restaurants are experiencing daily challenges, such as managing labor and turnovers, as well as having patrons coming at all different times, food personalizations, allergies and other issues, he said.

Hiring signs adorn the windows of retailers and restaurants around the country as consumers begin dining out and shopping in-person regularly again.

Whatever the cause of the staffing shortage — there’s currently a roiling debate over whether it’s because of overly generous unemployment and stimulus benefits incentivizing workers to stay home, or whether it’s because low-wage employees are still struggling with workplace safety and issues such as child care — the fact is the U.S. unemployment rate is still above 6 percent. That’s down from 13 percent a year ago, but almost double the 3.6 percent joblessness rate in May 2019.

“There are millions of people unemployed, but millions of people have gone back to work, so a labor shortage is not going on here,” said Sylvia Allegretto, a labor economist and co-chair of the Center on Wage and Employment Dynamics at the University of California, Berkeley. “There is not one clear story, but rather a confluence. And, no one is asking these businesses if they tried to offer better pay or better benefits.”

Allegretto, who studies low-wage work, says it typically becomes difficult for employers to find new workers when unemployment dips to 3 percent. She points to the most recent jobs figures in April, which show U.S. unemployment at 6.1 percent — down from more than 13 percent at the same time last year, but still close to double the 3.6 percent joblessness rate in May 2019

Some economic commentators say overly generous federal unemployment and stimulus money is dissuading people from returning to lower-wage jobs. But, Allegretto, who focuses on the restaurant industry, said most of these workers don’t qualify for unemployment, which is dependent on the amount of wages earned and time worked.

Rather, Allegretto believes the problem stems from elsewhere: front-facing workers fear interacting with people who are not vaccinated fully. Additionally they may still have issues with child care, which makes them unable to go back to jobs — or start new ones — that don’t provide consistent schedules.

On top of that, these workers rely on tips, so if restaurants aren’t operating at full capacity, and shifts are not busy, it means fewer hours and less tips.

“Workers are in flux right now, and they are not happy, so they may have gotten different jobs rather than return,” Allegretto added. “These jobs in retail and restaurants are some of the lowest paid and lowest job quality. If people are not accepting these jobs, in order to attract them and get them to come back, they have to think about increasing the attractiveness of the job.”

Retail businesses are increasingly using automation to manage back office duties, as well as provide customers with the same “magical payment experience” they would find online, such as making a purchase anywhere in the store versus funneling people to one corner of the store, said Domm Holland, co-founder and CEO of Fast, a San Francisco-based that makes technology for a more secure online shopping experience and has raised $124.5 million in funding to date.

“Exposure to the virus has changed restaurants and retailers,” he said. “Restaurants use QR codes so they don’t have to hand out menus. Stores are rolling out digital ordering, and checkout and payments is a huge piece of that.”

Fast is furthering the concept of “headless checkout,” which involves automating the entire checkout process for both the buyer and seller. For example, if you see a recipe for soup, you can also purchase the bowl the soup is in with one click from the page, he said.

“Headless checkout will be the defining point of commerce this year,” Holland said. “It unlocks actual functionality. If you see someone wearing a bracelet on television and want to buy it, you can embed a Fast Checkout button to buy it without ever having to leave the screen. The biggest brands are all scrambling for this because before this, there was always a link back to a website. Never a connection between native content and commerce.”

Kristin Baker Spohn, general partner at Palo Alto-based venture firm CRV, focuses on investing in enterprise software in the consumer and health sectors, and says venture capital interest in automation is “where the puck is heading.”

“The digital transformation was already happening, but now we are seeing the acceleration of it,” she added. “Physical stores are adopting automation at a greater pace, that is bringing about the future.”

Waitwhile works with businesses on capacity management, especially as regulations on social distancing and mask-wearing have evolved over the past year. It is also doing more curbside pick-up functionality, enabling shoppers to sign up for a time to pick up their purchases so there is not a large congregation of people waiting, she said.

Meanwhile, Standard enables a speedier and more convenient checkout process, essentially allowing consumers to shop on their own terms, but still receive the same retail experience no matter which way they choose to do it.

“Legacy technology for enterprises was clunky, but now there is the ability for someone to shop online, and if they need a fitting, they can go on the website and sign up for one,” Baker Spohn said. “It’s fascinating to hear about the power of analytics — how long something has been in a cart and the conversion to a purchase. Now, companies have better insights into their consumers’ behaviors and journeys.”