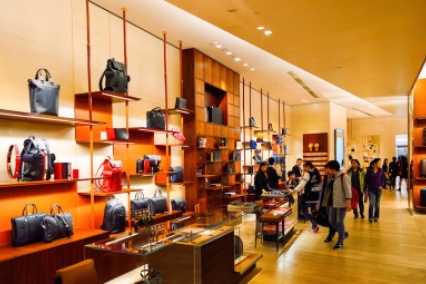 Today’s luxury consumers are constantly connected, time-poor and understand that the quickest, cheapest, most convenient way to shop is, increasingly, online. When it comes to fashion, they crave newness — new products, new images and new experiences at the speed of Facebook.

So where does this leave the physical store? Can retailers that have traditionally relied upon product to drive footfall transition embrace a world where stores must also deliver new services and experiences to every shopper who walks through the door? What will the store of the future look like?

Indeed, e-commerce’s share of the shopping pie is growing. From 2000 to 2015, e-commerce jumped from 2 percent to 10 percent of all US retail sales. In the luxury sector, e-commerce is the only channel currently growing double digits and is expected to climb from 7 percent to 20 percent of global luxury consumption by 2025, according to Bain & Company.

But unlike music, films or food, fashion is a product many shoppers want to touch and try on before they buy. The physical fashion store isn’t going away — but it is changing, as retailers come under pressure to provide consumers with personalised, data-driven service, and experiences — not just products — across all platforms.

Consumers no longer need to go to a physical store to buy a product. As a result, the strategic purpose of the store has changed. Shopping in stores must either be as cheap and convenient as buying from Amazon, or entertaining — offering memorable experiences that can’t be replicated online.

“You have to create an experience that people go to, and then they shop,” explains Norman Roberts, vice president of FRCH Design, the which has designed stores for Under Armour, Macy’s and Tiffany & Co. The store of the future must compete with leisure experiences such as trips to the cinema or sports matches, for a share of the consumer’s valuable free time.

This will require retailers to design dynamic, constantly changing physical spaces that “give people a reason to go to stores and say, what’s new? What have you got?” says Armand Hadida, founder of Parisian fashion and lifestyle concept retailer L’Éclaireur, speaking at BoF’s VOICES event at the Sydney Opera House last month.

“Many of our customers can afford to buy just about anything, but nothing holds more value than an incredible experience,” says Daniella Vitale, chief operating officer and senior vice president of Barneys New York, pointing to exclusive in-store events like meet-and-greets with designers.

“People are coming in to want to discover things, enrich their lives and be excited,” agrees Kim Bui Kollar, director of special projects at Pedder Group, which is part of Asian retail and brand management group The Lane Crawford Joyce Group. Last year, Lane Crawford partnered with environmental organisation Friends of the Earth to host in-store events including tree planting and talks on saving energy, which positioned the store as a “member of the community,” Bui Kollar says.

According to Doug Stephens, the shift from products to experiences will overturn current retail business models. “The store is evolving from being a distribution channel to becoming a media channel,” he says. In the future, the best retailers will “charge brands an upfront media fee to be incorporated into the store experience,” Stephens predicts.

For most shoppers, omnichannel is already the norm. Consumers no longer perceive barriers between different shopping channels — be it in-store, on desktop, mobile, via Instagram or marketing emails. Over the next five years, the “connectedness” of the consumer will increase, through elements like the Internet of things and social commerce, challenging retailers to capture consumers’ non-linear journeys across channels.

“We are in this web of different customer journeys, but many of our businesses are still built with different siloes and different functions that are responsible for the different areas, and that just isn’t going to work moving forward,” says Michael O’Keeffe, chief executive of skin care brand Aesop. Indeed, some retailers — particularly at the luxury level, where sales associates often work on commission — still view e-commerce as competing with in-store sales. Changing this mindset will require new models for staff compensation and hiring.

Meanwhile, some digitally native fashion companies are pioneering new models for physical retail in the e-commerce era. Warby Parker, Bonobos, Sézane and Nasty Gal all launched as online-only ventures and have since opened “e-commerce showrooms” — physical spaces where consumers can try products, and then place their order online, rather than walking out of the store with the product.

This model removes the complexity and cost of handling store inventory that is involved in traditional wholesale retail. “Instead of focussing on the operational aspect of getting inventory on shelves and in stores, and dealing with the overhead of having lots of inventory on hand that may or may not be productive, we’re able to invest our time and energy in the service element, in how our stores look,” says Brad Andrews, chief merchandising officer at Bonobos, which launched online in 2007 and now has 22 physical stores, with plans to open eight more this year. In-store consumers “spend more on average than our direct online customers, they repeat faster and they return less product,” he adds.

Another omnichannel leader is Farfetch, the multibrand e-tailer that serves as a digital storefront for over 300 physical boutiques. Last year, Farfetch acquired London boutique Browns, which it plans to use as a testing ground for new omnichannel retail technologies. According to some, it is only a matter of time before online and offline retail become completely connected. “The vision I have for retail in the future is you can walk out of the store with your purchase, you don’t have to stand in line, it bills you like you would online — one click and you’re out the door,” says Norman Roberts.

The Power of Data

The final pillar of the store of the future will be data. While people willingly turn over personal data to Facebook and Google, or share credit card details with e-commerce stores, developing enough trust for consumers to share their data in physical stores remains a challenge.

“Traditionally, consumers have been wary of sharing information with retailers because it’s often led to nothing but spam and irrelevant offers,” says Stephens. “Privacy is a currency and consumers are wiling to spend that currency where they perceive relevant value.”

For example, if a shopper is logged in to her account with a retailer, when she enters the store, beacon technology can provide sales associates with her purchasing history and preferred brands, or send personalised discounts and promotions to her smartphone.

Beacons can also track where shoppers move quickly and where they linger, enabling retailers to make informed decisions about store layout — and potentially turn this data into a revenue stream. B8TA, a tech store in Palo Alto, measures consumer interactions with products in real time and shares this data with brands for a fee.

Some retailers are already experimenting with experiential, omnichannel and data-driven retail models. According to O’Keeffe of Aesop, today’s retailers must ask themselves: “How many of our customers really remember, with some sort of pride, their last experience within our store?”

From: Business of Fashion

Why Barnes & Noble is getting into Beauty