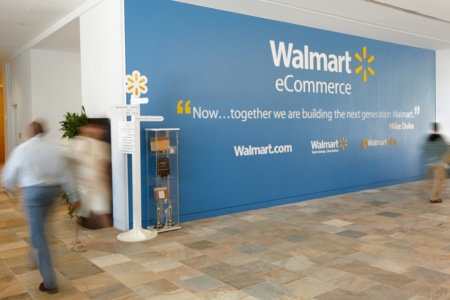 The world’s largest retailer is now on track to double the number of giant warehouses dedicated to online sales to 10 by the end of 2016, according to Justen Traweek, vice-president of e-commerce supply chain and fulfillment.

That pace is faster than the 8 large warehouses that industry consultants expected Walmart to build by the end of 2017.

At the same time, Walmart in the last year has installed new technology such as automated product sorting and improved item tracking that for the first time puts them on par with Amazon’s robot-staffed facilities, according to supply-chain consultants.

“We have doubled our capacity in the last twelve months and that allows us to ship to a majority of the U.S. population in one day,” Traweek said.

Walmart is holding its annual investor day when, among other topics, it is expected to update on the progress it has made in its e-commerce business.

Walmart, which has about 4,600 stores in the United States and over 6,000 worldwide, has been investing in e-commerce for 15 years, but it still lags far behind Amazon.

“These additions definitely give Walmart the opportunity to compete better than other companies going head-to-head with Amazon,” said Steve Osburn, director of supply chain with consultancy Kurt Salmon, referring to the likes of Target and others. “Having said that, choosing to race with Amazon is different than catching up with them.”

Walmart in the last four fiscal years has accelerated its investment in e-commerce and digital initiatives, excluding acquisitions, from about $300 million in 2013 to $1.1 billion this year for a total of about $3 billion, according to public filings and earnings transcripts. E-commerce accounts for about 3 percent of Walmart’s overall sales.

Since 2011, Walmart has acquired 15 e-commerce startups, one of which became its core Silicon Valley technology arm, @WalmartLabs. Last month, it completed its purchase of online retailer Jet.com for about $3 billion and named Jet’s founder, Marc Lore, the head of Walmart’s e-commerce business.

The massive warehouses are key to Walmart’s e-commerce strategy because they enable the company to deliver packages more economically when shipping online orders with multiple items. Fulfilling such orders now can often mean multiple shipments from different warehouses or stores.

“This improves two fundamental things: Walmart’s speed to market, which is how fast their products reach consumers, and it will help them reach an even larger audience,” said Regenia Sanders, vice-president of supply chain at consultancy SSA & Co.

Even with Walmart’s new investments, though, Amazon has a commanding position in e-commerce with 40 warehouses of one million-plus square feet and plans to open five more by the first quarter of next year, according to data compiled for Reuters by retail technology firm ChannelAdvisor.

An Amazon spokeswoman did not comment on specific questions for this story, but did say the company is laser focused on its customers and delivering unlimited, fast, free Prime Shipping.

Inside Walmart’s 1.2 million square-foot warehouse in Bethlehem, Pennsylvania, two 40-foot robotic towers shuttle products like Cheerio’s from storage to packaging. It handles more than 70 percent of the orders for best-selling products, Traweek said.

Workers inside wear smart-phone like devices on their wrists that tell them where to find a product, what box it needs to got into and even how much tape is required to seal the package.

The devices give Walmart the ability to store items anywhere in the warehouse and increase efficiency and lower costs, Traweek said, though he would not detail cost savings.

The new warehouses allow Walmart to now ship orders to 70 percent of Americans in a day, Traweek said, but it cannot yet do so profitably. That’s why it has not yet begun to promise one-day delivery to customers, he said.

“Anything that crimps Walmart’s profits in the short term will not be met well by their shareholders, so trying to find a cost-effective shipping solution is a sensible approach,” he said.

Walmart plans to complete at least one more giant warehouse, in addition to the ten, by the first quarter of 2017, Traweek said. The retailer had worked with five giant warehouses since launching its online business in 2000.

What retailers can learn from J.C. Penney & Lands' End's turnaround