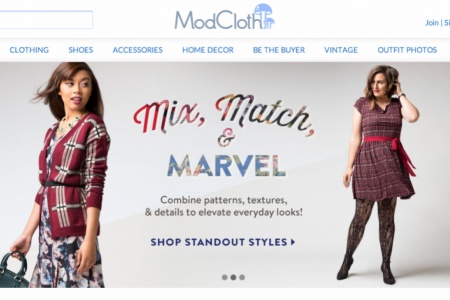 Walmart is buying the women’s clothing company on behalf of Jet.com, its subsidiary that has been on an acquisition spree over the last 12 months. Jezebel first reported the news.

ModCloth was founded by high school sweethearts Susan Gregg Koger and Eric Koger in 2002 while both were studying at Carnegie Mellon. What started as a product of Susan’s finds in thrift stores turned into a $150 million revenue business by 2015, the company said that year.

The company raised nearly $80 million in venture capital and eventually relocated to San Francisco. It hired Urban Outfitters exec Matt Kaness to be CEO two years ago and had started to experiment with physical stores, including a permanent outpost in Austin.

But ModCloth had struggled to operate profitably and had been unsuccessful in recent attempts to raise additional funding, sources said. The company also had debt coming due.

Recode could not confirm the purchase price, but industry sources believe the company would have been lucky to get around the $80 million that it had raised from investors.

For Jet, the deal would be its fourth since March of last year aimed at adding a wider assortment of products to its online megastore. Jet acquired online furniture seller Hayneedle last year for $90 million before Jet was acquired by Walmart for $3 billion.

Since then, it has also bought Zappos competitor ShoeBuy and outdoor apparel retailer Moosejaw.

These sites have a few things in common: They are all at least 15 years old and have had trouble combining consistent revenue growth with profitability in the modern internet age.

Walmart and ModCloth reps did not respond to requests for comment, but we’ll ask Jet founder and Walmart e-commerce boss Marc Lore about it next week when I interview him onstage at Code Commerce.

Why Zara Is The Most Exciting Retailer Today